BUSINESSES in Henley are bidding to lure more royal regatta visitors into the town centre.

A new Z-card with special offers from retailers is to be given to ticket holders to tempt them across the bridge.

The initiative is a joint venture between the Henley Business Partnership, South Oxfordshire District Council and Henley Town Council in conjunction with Henley Royal Regatta.

It is designed to increase footfall in the town centre and give an extra boost to Henleys economy during the five-day regatta in July.

The Z-card is a credit-card sized fold-out map of the town with the offers and discounts from 10 retailers on the inside. They will be sent out to regatta ticket holders next week. The businesses involved are Boatique, Gerry Weber, Haringtons, Henley Sales and Charter, Hot Gossip, the Indian Garden Company, Laurence Menswear, Love Henley, Precious Love and Upstairs and Downstairs. The Henley Club gym is also promoting offers.

Henley Mayor Martin Akehurst said: Anything we can do to better the retail economy has got to be good.

Over the last 20 to 25 years there has been a rise in corporate hospitality on the regatta site which means people dont cross the bridge and come into town. From talking to people who run shops in Henley, they have certainly seen an enormous drop-off in trade over that period.

The newer generation see the regatta as the site not as Henley-on-Thames and I think weve got a tremendous amount here that would interest them.

Henley is an excellent shopping centre and it has a lot to see and offer people and the more we can market Henley to the outside world the better.

Helen Harvey, economic development officer at the district council who brokered the agreement with the regatta, said that many visitors to the world famous event stayed on the Berkshire side of the Thames and didnt come into Henley at all.

What were trying to do is encourage lots of people to come into the town, not just for food and drink but for things they can buy as well.

She said she had wanted all the business to offer the same thing, such as a 10 per cent discount, but because the retailers were quirky independents this was not practical for them.

Some businesses would be offering discounts of 20 per cent and Henley Sales and Charter was offering a complimentary bottle of champagne or Pimms to anyone who chartered a boat during the regatta.

Town centre manager Peter McConnell, a veteran rower, called the Z-card a fantastic initiative, adding: We need to try something to attract people to the Oxfordshire side of the bank.

Its really good for the town to have one of these kind of collaborations whether its Henley Royal Regatta or any other institution in the town.

Keith Douglas, chairman of the Henley Business Partnership, said: In business you have to continually re-invent yourself and any new initiative has to be applauded.

Well see what feedback we get from businesses and retailers in the town.

Gillian Nahum, a member of the partnership and owner of Henley Sales and Charter and Boatique in Hart Street, said: I think it is fantastic and hope it will further cement the relationship between Henley Royal Regatta and the towns businesses because I think thats something that has been lacking.

Laurence Morris, owner of Laurence Menswear in Duke Street, will offering a 10 per cent discount on all items to people who show the Z-Card.

He said: The retailers have to find every which way we can to improve footfall and to tie in with the regatta is a fantastic opportunity.

The Z-card been paid for by the district and town councils and the business partnership.

Last year, visitors to the regatta were given free postcards to encourage them to shop in the town or return some other time. The 5,000 A5 cards showed images of nine independent retailers and their details appeared on the reverse. 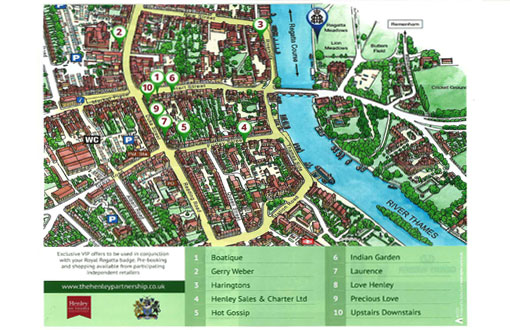