A NEW interactive window display has been installed outside an empty shop in Henley.

The painting of a meadow scene was put in place at the former Blockbuster store in Market Place on Saturday, replacing a giant blackboard that had been there since June.

The meadow theme was chosen to coincide with the visit of the Britain in Bloom judges this week.

The scene has been created using clip-on flora and fauna including bees and rabbits made by children at Bishopswood Special School in Sonning Common and at Lady Sew and Sew in Farm Road, Henley.

She said: My background is in environmental consultancy so I know about the plight of birds, bees and butterflies and I thought it would be fun to do a wild meadow scene.

I blew up a photo I had taken of a poppy field and then painted over the top, which took me a good couple of hours. We then held the workshops with Lady Sew and Sew where the children created the paper and fabric flowers.

One of the first children to attach her own design to the display was 10-year-old Katie Blundell, a pupil at St Marys School in St Andrews Road. She made a 3D flower from fabric and pipe cleaners.

Vanessa Blogg, from Lady Sew and Sew, said: The flower-making was a great way to get local children involved and to have the paper flowers made by the children at Bishopswood on display as well is perfect.

The flowers were made last week and we had great fun shooting Lady Sew and Sews first YouTube video.

The blackboard was part of a window-dressing initiative developed by Henley Town Council and the district council to make the towns empty shops more attractive during the tourist season.

People were encouraged to create chalk doodles which could win them prizes. 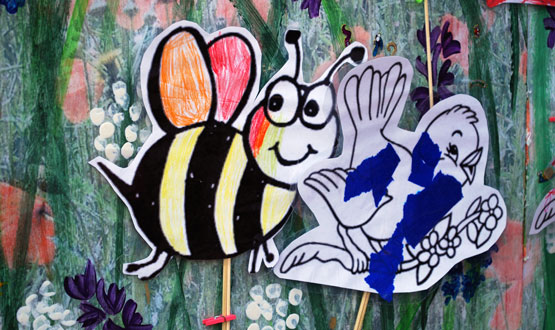