Spurned boss made me quit

A ROCK singer was forced to quit his day job because a colleague fancied him, a tribunal heard.

Tom Ford, 31, of Duke Street, Henley, claimed Lucy Myers made comments about his appearance and gave him gifts in a bid to win his affection.

But after he rejected her advances and she was promoted, she became incredibly hostile. 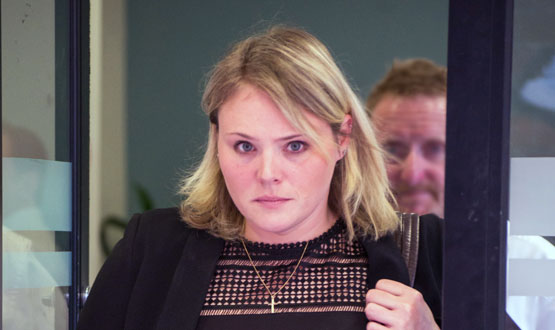 He claimed that 34-year-old Miss Myers sent him rude messages and eventually he was forced to resign from the Good Shelf Company, a bespoke furniture business in Rotherfield Greys.

Mr Ford is suing the company and Miss Myers for sex discrimination, unfair dismissal and constructive dismissal. The employment tribunal sitting in Reading heard that soon after he started in February 2013, Miss Myers began behaving inappropriately and seemed to enjoy making him feel uncomfortable.

Mr Ford, who is lead singer of rock band Motherload, said: Lucy would brush past while in my area, pushing her breasts against me. I told her not to touch me and to be strictly professional.

He claimed Miss Myers would make derogatory comments about his long-term girlfriend, Sarah-Jayne Whiteley, and she brought him gifts and put a plate of food on his car seat in an attempt to win his affection. Miss Myers would regularly use swear words at work and referred to him using obscene insults.

After several complaints to his manager David Gibbon were ignored, it became almost impossible to work.

Mr Ford said it was an extremely stressful time and was making me incredibly unhappy.

He thought the problem was solved in October when Miss Myers left the company but she returned a few weeks later as a general manager, which he said had been his role.

Mr Ford claimed that he was demoted to packing the furniture rather than building it.

He said he suspected Mr Gibbon and Miss Myers of having an affair around this time after spotting her hand-feeding him chocolates in the office.

Mr Ford said Miss Myers would frequently pull up outside the workshop then drive off when he spotted her.

He saw her speaking with Mr Gibbon late one night and later found empty whisky and vodka bottles in his office.

On December 13, he was called into Mr Gibbons office for what he claimed was a disciplinary hearing, which he recorded on his mobile phone.

Mr Ford said: I was being accused of being late and taking extensive time off.

Both accusations were completely fabricated. It is as if David and Lucy were making things up to get rid of me.

He resigned by email on December 28 after being told in an email from Mr Gibbon that he would not be needed to work in January.

He said Miss Myers may have inadvertently brushed against him in the cramped workshop but did not do so on purpose.

What youve done is taken an entirely innocent and generous act and twisted it to form some basis of a claim before this tribunal, said Mr Mitchell.

Miss Myers, who is American and lives in Highmoor, described the sexual harassment claims as absolutely false.

She told the tribunal that when she first met Mr Ford they got on like a house on fire but admitted she did have a crush on him then.

Miss Myers said the relationship soon turned sour, claiming he regularly bullied her, called her fat and ugly and made inappropriate sexual comments about her.

She had been shocked and disgusted to discover the vulgar allegations made by Mr Ford after he left the company.

She said: I have been completely distraught thinking I could possibly have done anything that could be misconstrued as sexually harassing.

These absolutely false allegations have stripped me of any shred of self-confidence and at times have left me physically ill and incapable of going into work.

Referring to the incident where she had left food in Mr Fords car, Miss Myers said he had thanked her for it and said it was delicious.

She said that one of the reasons she had left the company was because he was so nasty to her.

When she returned she was given more responsibility but found Mr Ford had an appalling attitude and often took long breaks.

Mr Gibbon said he found the pairs relationship distressing and inharmonious but admitted doing little to try to resolve the problem.

He said he was unaware of any sexual advances made by Miss Myers towards Mr Ford.

Mr Gibbon said Mr Fords timekeeping gradually became on a as he pleased basis and he spent a lot of time on his mobile phone.

In September, he had strong words with him about his attitude but things did not improve.

Mr Gibbon said that when Miss Myers returned for her second spell at the company Mr Ford refused to do what she asked and soon began to resent requests from him as well.

He said Mr Ford voluntarily took on responsibility for packing but his attitude did not improve.

Mr Gibbon said that at Christmas he decided to make cuts at the company because of a lack of sales and would have to make Mr Ford redundant with a heavy heart.

He said he believed Mr Ford was only making the claim for constructive dismissal to try to get money out of the company.

The tribunal will issue a reserved written judgment by October 17.