Bumper year at Christmas festival as organisers step down 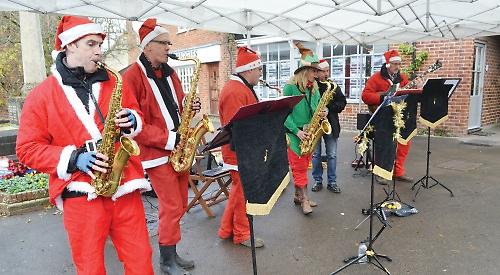 More than 1,000 people visited the event in High Street on Saturday.

Father Christmas arrived in a fire engine and was met by 60 girls from the Performanze Dance and Singing group and the Watlington Concert Band before making his way to his Narnia-themed grotto.

There were also performances by Benson Choral Society, Casual Sax and Nadia’s children’s singing group. There were 16 craft stalls and eight food stalls as well as hot drinks and cakes for sale. A raffle was drawn by the Duchess of Kent.

The profits will go towards the cost of the town’s Christmas lights and youth groups which helped out on the day including the Rainbow Nursery, Watlington scouts, the youth club, junior football club and judo club.

The fair was run by Sam Swanson, who runs Chiltern Pet Partners with her husband Adam.

Mrs Swanson said: “It was an absolutely fabulous day. I was in the middle of it all day and it was brilliant. The high street was packed and you couldn’t walk up and down it.

“Every stallholder I spoke to had a record year and most of them are charities and local groups.”

Meanwhile, Mrs Swanson is stepping down after eight years along with committee members Susie Ingham and Mr Swanson.

She said: “I’ve got to step away — working full-time and organising the fair takes its toll.

“I really hope somebody takes it forward. It really needs fresh blood, new ideas and a new perspective on it. I’m hoping the business association is going to hold a recruitment evening in the New Year. I can’t see it happening unless it does.”