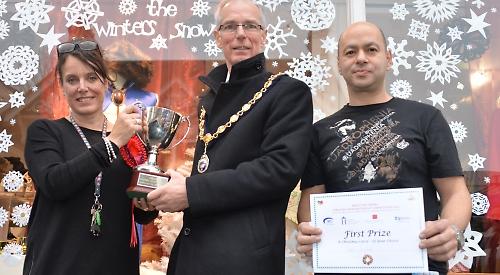 The display at the Sue Ryder charity shop in Duke Street was designed and installed by assistant manager Amelia Staines, of Deanfield Avenue, Henley.

It is inspired by the hymn See Amid The Winter’s Snow and includes a range of Christmas items that were donated at the shop, including coats, dresses, hats, stockings, a tree, cuddly toys, a wooden camel and a miniature rocking horse.

It also includes a baby Jesus and a crib, both of which came from the charity’s hospice at Nettlebed. The display will remain in place until after Christmas.

Mrs Staines, a graphic designer who lives with her husband Simon and children, Jack, 18, and Chloe, 20, spent about 10 hours cutting out the flakes and came into work on a day off to set up the display.

She was presented with a trophy, certificate and £125, which she donated to Sue Ryder.

Mrs Staines said: “It’s such a deserving charity and it really didn’t cost me anything to enter, apart from a little bit of printer paper and a few hours’ work!

“The hardest thing was not selling any of the items because as soon as we put the display up, people were asking about certain items and we had to explain that they were not for sale at the moment.

“I’m very excited to win and pleased for the shop too as it has really raised our profile.”

Shop manager Cuneyt Sengunes said: “It’s an amazing display and when I saw the finished result I thought she just had to win. Amelia put so much effort in and lots of customers have been commenting.”

Businesses had to showcase their own trade or profession as well as this year’s theme of a Christmas carol of their choice.

The runners-up, who won prizes of £100, £75 and £50 respectively, were the Henley Pet Shop in Bell Street, the Cancer Research UK shop in Duke Street and Adventures in Living in Market Place.

Henley Mayor Julian Brookes, who helped judge the competition, said: “The top entries were all strong but Amelia’s display had the edge. She’d gone that little bit further and we felt that should be rewarded.”

Alex Nearchou, of Delegate, said: “Amelia’s effort was fantastic and stuck very closely to the theme. Everyone did brilliantly but she was a clear winner.”