Couple in £5,000 appeal to give daughter Olympic dream 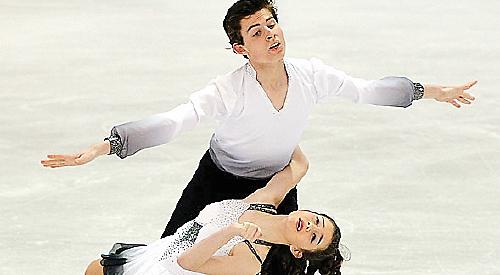 A COUPLE trying to raise £5,000 to help their daughter fulfil her dream of becoming an Olympic ice dancer.

Emily Brown, from Whitchurch Hill, has been chosen as reserve for the Great Britain team competing at this year’s International Skating Union world junior figure skating championships in Taipei next month.

But the 15-year-old and her partner James Hernandez, from Amersham, need to pay a choreographer to write and teach them two routines.

The pair, who have been skating together since 2015, also hope to be chosen as the main British pair for the 2018 championships in Bulgaria, which would be the first step on the path towards selection for the Olympic squad.

Emily’s parents Ray and Esther have been living as frugally as possible to fund her passion, which costs up to £20,000 a year in tuition, equipment and travel to competitions all over the world.

However, they say they are now at breaking point and need more help if their daughter is to succeed.

Emily started ice skating with her brother Harvey, 13, about six years ago when the family were living in their native Preston.

It was originally Harvey’s idea and only meant to be a casual hobby but he grew bored of it while Emily showed a talent and became hooked.

After completing a six-week beginners’ course in Blackpool, she started having private lessons and was practising for at least half an hour every day before school.

Mrs Brown said: “It was just meant to be a bit of fun but from the minute she got on to the ice she found it really easy. She flew through that introductory course.

“I remember the person who originally taught Emily said she was going to be something special, though I didn’t think much of it at the time. From then on, though, she just kept going from strength to strength.”

Emily initially trained as a solo figure skater and entered her first international championship in Budapest in 2014, where she won a bronze medal and was the highest-placed British entrant.

She also learned to ice dance and gradually realised this was where her main talent lay.

She trained with several partners but could not find someone permanent until she met James at a competition in 2015 and their families let them train together at his nearest rink in Slough.

At this the Browns were still living in Lancashire so from September to December they would leave home at every Saturday so that Emily could be on the ice by .

They would collect her on and her school allowed her to miss that day.

Mrs Brown mother said: “That was the hardest three months of our lives but there were so few boys available that we had to go for it. Emily and James were a natural fit from the start and knew each other’s capabilities.

“The petrol cost was exorbitant and by we were nearly dead on our feet. It couldn’t continue so we had to move.”

The family initially relocated to Wokingham and Mrs Brown found work as head of drama at Maiden Erlegh School in Earley while her husband took a job with an electrical firm in Culham. However, they couldn’t afford the rent so moved again to their current home in Hill Bottom and sold one of their two cars to make ends meet.

Mrs Brown said: “It was crazy and quite a shock as the rent at the first place was twice what our mortgage in Preston had been.

“There were a few weeks where we thought we’d have to move back because it was all getting too much but we persisted.

“It has been quite a tough journey and the cost has been horrendous. I try not to add it up but every penny we earn has gone into her skating and that’s only half the cost as James’s parents pay the other half.”

Now Mr Brown walks more than four miles into Pangbourne and back every day to commute to work by train.

Emily and James, who train up to five times a week and often start at , entered their first international competition a year ago in Oberstdorf, Germany, where they were placed fourth out of 15 pairs.

But the family needs help if the pair to progress.

Mrs Brown said: “Right now we’re at a sticking point because as they’ve progressed they need so much more in the way of training.

“They will be up against international competitors who rehearse for at least 25 hours a week. We will need to find the money from somewhere but it would be a weight our minds if we could cover the one-off cost of the choreography. We’ve maxed out our budget on everything else.

“Every other pair has a top choreographer behind them and Emily and James just won’t be at the same level without it.

“It would mean so much to us because we’ve given up everything since we moved south. We haven’t had a holiday in years and the skating is our main priority.

“Harvey has to get up at the same time as us because we only have one car and I don’t have time to come back for the school run after Emily finishes training.”

“Emily is a very grateful young lady and is always thanking us for everything we’ve done,” said Mrs Brown.

“She hates to ask for anything because she knows how much we’ve given up but we need some help if she’s to stand a chance.

“She is so dedicated to her sport and absolutely loves it. We’re incredibly proud and think there’s something quite magical about her and James — we’ll happily sit for hours in the cold watching them train.

“I believe our efforts have been completely worth it and that she has the potential to make it.”

Emily said: “I could never have imagined what it would lead to when I had my first skating lesson but I absolutely love it and really want to go as far as I can.

“James has been a great partner — it took a while to find the right person and we’ve had to move a long way from home but he’s like another brother.

“We work together well and have a good laugh when we’re off the ice.

“I’m really lucky to have such great support from my family but it would mean so much to get some extra help with the choreography because it would put me on a more level playing field with the competition.”

Anyone who can help should email Mrs Brown at esther.brown08@hotmail.com