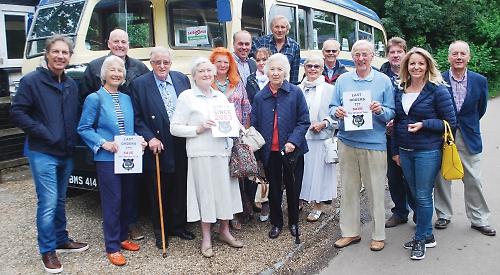 RESIDENTS of Fawley could have a new local within two years after winning a 14-year planning fight.

An application to demolish the Walnut Tree in Roundhouse Lane and build a new pub in its place, along with four houses, has been approved by Wycombe District Council’s planning committee, despite planning officers recommending refusal.

Much of the £2million that the development is expected to cost could come from the sale of the homes.

Officers said the development would “neither respect nor reflect the local rural context by reason of its layout, scale, bulk and mass” and the design was not of a high standard.

They also claimed the new buildings would represent overdevelopment of the site and would be detrimental to the prospective occupiers of the new houses, which wouldn’t have enough parking.

But all but one of the 14 members of the committee voted to approve the application.

They said there was “very significant weight to the provision of a community facility in the form of the public house”. Residents formed an action group after the pub closed in 2003 and there were plans to convert it into a house.

The proposal was rejected by the council and on appeal and then the pub fell into disrepair.

It is now owned by a resident operating under the name the Walnut Tree (Fawley), who wants to include three letting rooms in the new pub.

The plans were drawn up by Henley architects Spratley Studios.

More than 20 residents attended the committee meeting at the council offices in High Wycombe on Wednesday last week,

They included Alfred Waller,
co-chairman of the Save the Walnut Tree Action Group, and Sir William and Lady McAlpine, of the Fawley Hill Estate.

They were taken to the meeting in a vintage bus owned by Nick Sargent, a former chairman of the Fawley parish meeting, and had printed signs reading “Last orders” and “Saving the Walnut Tree since 2003”.

They were not allowed speak at the meeting but the application had received dozens of letters of support from locals.

Mr Waller said: “We are very pleased. It has been nearly 15 years — I know someone in the pub trade who said he couldn’t remember a campaign as long as this that had been successful.

“We knew we had a lot of support. It was a lively debate and our councillor Chris Whitehead was very good at persuading the rest of the committee to approve the application.

“There was only one objector out of 14 members, which was very pleasing.”

Mr Waller said it was hoped to start construction on the new pub as soon as possible.

He said: “It’s going to take a minimum of 18 months and we want to move the building back up the site so you get a view over Stonor valley.

“We are looking forward to getting going as it has been a long fight.”

Lady McAlpine said: “I’m thrilled to bits. It has been a long haul and, quite frankly, I can’t understand why the planners thought they should dictate what we wanted when the whole village approved of the plans.

“It was pretty obvious when you’ve got 300 letters in support and none against. Thanks also to our lovely local councillor Chris Whitehead.”

Resident Paul Vye, who attended the meeting with his wife Wendy, said: “After so many years and a long campaign, the villagers of Fawley have at last the necessary consent to proceed with the redevelopment of the ghost of the old Walnut Tree.

“The pub has lain dormant and dilapidated for too many years, out of reach of the villagers and a constant eyesore for all to witness.

“The fight to achieve this result has rested with just a few determined members of our village and they are to be congratulated.

“The new Walnut Tree promises to be a vibrant focal point for all in the area in the heart of the Chilterns and particularly a very welcome meeting centre for present and future members of our local community, which seems to be an increasing need in our often fragmented society.

“We can now look forward to the next stage and hopefully welcome allcomers to the grand opening in the not too distant future.”