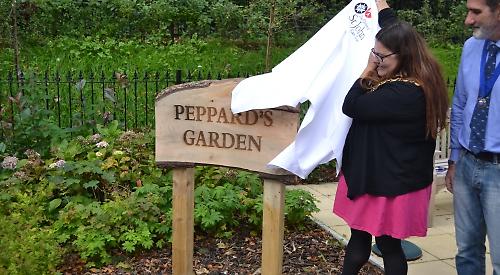 THE garden of a Henley care home has been named in honour of the old Peppard ward at Townlands Hospital.

The Peppard’s Garden was officially opened by Henley Mayor Kellie Hinton on Friday when she unveiled an oak plaque in the grounds of Chilterns Court in York Road.

She was joined by representatives of the Orders of St John Care Trust, which runs the home, her escort and fellow town councillor Dave Eggleton and Councillor Ian Reissmann, who chairs the Townlands Steering Group, as well as residents of the home.

Campaigners for the new hospital had asked for the Peppard name to be retained in the new £10million health campus, which includes Townlands Memorial Hospital and the care home, which replaced the Chilterns End home in Greys Road.

Councillor Hinton said: “For most of my life it has been a battle to keep Townlands and what we might get should it be replaced.

“It’s down to the efforts of people like Ian and the steering group that we got the hospital we wanted and this wonderful facility is part of it.

“I’ve also been involved with Henley in Bloom for a long time and I went up to the old home in Greys Road to judge their garden. This is a wonderful garden here for the residents to enjoy.” Councillor Reissmann said: “It’s nice to see another finishing touch to the project. It’s a lovely garden and a great part of this wonderful new facility.

“It’s also great to see the Peppard name retained as it’s part of the history of this site. A lot of people wanted the hospital to stay as a bedded unit.”

Kerry Dearden, commercial marketing director of the trust, said: “This home has really good, close links with Townlands Memorial Hospital and the community.

“The name reflects the impact the old unit had and we want to link that with the ongoing services here.”

The new hospital opened in March last year with a rapid access care unit in place of the old 14-bed ward.

After losing their fight to keep the beds, campaigners asked for the Peppard named to be used and suggestd that a ward at the care home with 11 beds that are used by the care unit be named the Peppard Wing.

The Oxfordshire Clinical Commissioning Group agreed to recommend the idea but the trust declined, saying the name had nothing to do with the old care home and instead decided to call the ward “Bluebell” at the suggestion of the residents.

The 64-bed home opened in November and was officially opened by the Duke of Gloucester in November. The Duke, who is first cousin to the Queen, unveiled a plaque at a ceremony with invited dignitaries.

Primroses from the old Townlands Hospital site have been replanted in the new garden.

Members of the hospital’s Friends group dug up the plants in 2014 and took them home to look after until the development was completed.