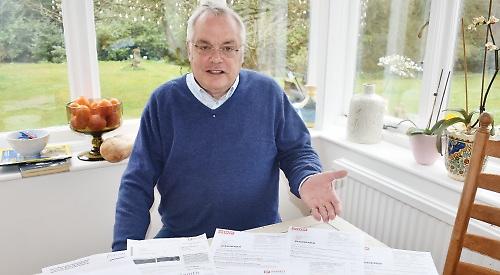 MORE patients have come forward to say they have been unfairly fined while parking at Townlands Memorial Hospital in Henley.

It comes a week after Henley MP John Howell called on the NHS to sack Smart Parking, the company which enforces the hospital car park, saying it had treated people in an “appalling way” which was “unacceptable”.

The company has already lost its contract at the neighbouring GP surgeries following dozens of complaints about unfair fines.

It uses automatic number plate recognition cameras to log vehicles entering and leaving the hospital car park and patients have to enter their registration details on a keypad at reception to receive free parking.

Housekeeper Georgina Bastos received three tickets at the hospital and the Bell Surgery when taking herself and her husband Manuel to appointments. Mrs Bastos, 65, who works for Trevor Swete, from Harpsden, and is Portuguese, was fined twice at the surgery on November 8 and again at the hospital the next day.

At the time, she was receiving treatment for pneumonia.

Mr Swete, 73, complained to Smart Parking on her behalf and even provided proof of her appointments but the company is still pursuing the Bastoses for almost £500 in fines.

He said: “They’ve been with us for 15 or 20 years. Their English is not too brilliant so they got very scared by these red letters.

“They are just trying to terrify people into paying by raising the price. It’s not very nice to think you are being threatened.”

Christine Spencer, whose 88-year-old mother suffered a stroke on Boxing Day, was issued with a ticket last month after taking her to her a weekly speech therapy session at Townlands.

Mrs Spencer, 62, of King’s Road, Henley, said: “I always log in, being aware through the Henley Standard that the parking was controversial. Despite logging in again on this particular occasion, I have been fined.”

She contested the fine and provided evidence of her mother’s stroke and the appointment on the day. However, she received no acknowledgement from Smart Parking and the fine has since gone up to £100.

Mrs Spencer said: “I’d had seven other visits prior to this one. My mother’s mobility is impaired so she couldn’t make it up the hill so I would take her up there to drop her off and then come back for her.

“Even though there is the 20-minute grace period I never took that for granted. There’s no verification and you don’t get a ticket or anything to say you have successfully entered your details.”

Mrs Spencer, who moved to the town with her husband Chris two years ago, said: “We still haven’t heard anything from Smart Parking but we are not going to pay, it’s so wrong. The whole thing stinks.”

Sally Smithson, from Kingwood, was fined after attending an appointment at the hospital in January.

She immediately complained to Smart Parking to say she had a legitimate appointment but received no reply and was then contacted by a debt recovery company to say that the fine had gone up to £160.

Mrs Smithson, a company director, said: “Needless to say, that I’ve no intention of paying them a penny. It’s utterly disgraceful behaviour.

“It’s shameful on Smart Parking that their processes are so inept that they can’t check the hospital’s reception system to see that cars have been legitimately parked.

“It’s doubly shameful that Smart Parking cannot be bothered to reply to or even acknowledge correspondence. And the whole matter is compounded by involving a debt recovery firm on no justifiable basis.

“While I’ve no appetite for going to court, I would be delighted to rigorously defend any case against me should one be brought.”

Amanda Hazelwood took her husband for a podiatry appointment at the hospital and parked in a disabled space, displaying her blue badge.

She says she registered her car at reception but later received a fine.

Mrs Hazelwood believes there may be a flaw in the registration system which means people are fined despite entering their details.

She said: “There is a catch in the system where when you press ‘validate’ and think you’re done, another ‘okay’ pops up. Reception told later me that unless you tap ‘okay’ it won’t register, hence why I was fined.

“I certainly was not prepared to pay and I sent letters, proof of appointment and contacted NHS Property Services.

“To have no proof of entering one’s car details is plain stupid and suits no one. At least pay and display issues a ticket of proof.”

Mrs Hazelwood’s fine was later rescinded but she says the system should still be replaced.

She said: “I know blue badge holders usually do not have to pay in certain pay and display car parks but if we do then I would rather pay a couple of pounds rather than get a fine. It’s stressful attending hospitals and even more stressful to end up being fined. No one thinks it’s a good idea, only Smart Parking.

“There will be more occasions when we have appointments at this hospital and we do not look forward to any of these visits because of the parking system in place. I’m worried all the time I’ll get another fine.”

Smart Parking, which also enforces the car park at Chilterns Court care centre, was sacked by the Bell and Hart Surgeries in November after only a few months following scores of similar complaints.

The surgeries have asked the company to cancel outstanding fines before the contract ended but some patients are still being pursued for the money.

Andrew Walley, from Remenham, was issued with a fine in November while attending the Hart Surgery for a flu jab.

He was there just 11 minutes, which is within the allowed grace period of 15 minutes, but was still sent a penalty notice.

Mr Walley, 65, who is vice-president of a technology company, complained to the surgery and was told they would ask for it to be rescinded but has now received a further seven letters from Smart Parking and debt collectors.

He said: “The fine has gone up to £160 and I can’t contact them by phone because it’s an automated system.

“If it’s a genuine infraction you pay up, or if there’s a small error you could get it reversed but these guys won’t have a bit of it.

“The surgery said to ignore it and they would add it to the list. I get the impression there are hundreds of cases.

“People are paying up. There are some quite nasty threats about credit rating or employability. They are threatening people. It worries me that they can get away with it.

“I’m going to sit it out. Were it to go to court and I was able to put my side of the story there’s no way any of these cases would succeed.”

Mr Howell said: “The British Parking Association have said they are going to investigate.

“We need a system that doesn’t increase stress for patients but actually helps make their lives easier.”

A spokesman for NHS Property Services, which is responsible for the hospital, said: “We needed control measures at the hospital because some motorists were abusing the free parking, so patients and staff couldn’t find a space.

“Although spaces are now more readily available, we know the Smart Parking system has caused some inconvenience.

“While we are aware that people have been wrongly issued with penalty notices, we have taken action with Smart Parking to get them rescinded.

“We are reviewing car parking management to improve the experience for patients at Townlands.”

Smart Parking did not respond to a request for comment.

• Have you been unfairly fined for parking at Townlands? Call Henley Standard reporter Jamie Presland on (01491) 419444 or email jpresland@henleystandard.co.uk