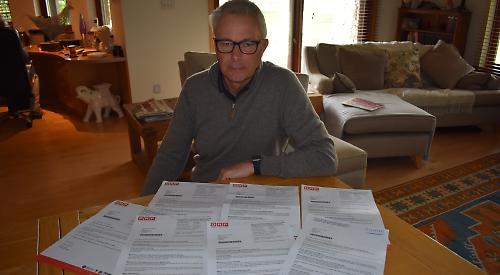 A MIDWIFE was issued with a £60 parking fine at a Henley doctor’s surgery while dropping off blood samples to be analysed.

Jayne Hancock, who makes home visits around the RG4 and RG9 postcodes, spent about 10 minutes at the Hart Surgery after seeing a mother and baby in Fawley.

She had agreed to drop the samples off with a colleague who would later take them for tests at the Royal Berkshire Hospital in Reading.

But two weeks later she received a fine in the post for unauthorised use of the car park.

The incident happened at the car park of the Bell and Hart surgeries off York Road, which used to be monitored by enforcement company Smart Parking until it was sacked in November after the GPs were bombarded with complaints from patients about being fined unfairly.

The same company is still responsible for the car park at the neighbouring Townlands Memorial Hospital, where there has also been a string of complaints.

The system required vistors to enter their vehicle’s registration number using a touchscreen in reception in order to obtain up to 90 minutes free of charge. There was also supposed to be a 15-minute “grace” period.

Smart Parking enforced the car park using automatic number plate cameras and anyone who failed to register, or registered incorrectly, was sent a £60 penalty notice which increased to £100 if it was not paid within two weeks. Mrs Hancock, 48, from Sonning Common, said: “I was dropping off the samples but when I went in the midwife I needed to see was seeing a lady so I waited about 10 minutes.”

She said she was angry at being fined adding: “Midwives are renowned for not having brilliant wages and £60 is a significant part of my weekly wage.”

Mrs Hancock appealed but this was rejected. She then appealed to the Parking on the Private Land Appeals service but in the meantime paid the fine in order to stop it being increased only to be told that effectively meant she had admitted liability.

Mrs Hancock said: “I decided to accept it and put it down to experience but I don’t agree that I have accepted liability.

“I do think they should have a proper procedure in place for that car park because it’s abused. On this occasion it wasn’t very well signed.

“In hindsight perhaps the receptionist should have instructed me on what I needed to do.”

Greg Read, 60, also received a fine after parking at the car park in November while attending an appointment. He says he entered his details correctly at reception but still received a notice in the post.

When he complained to the surgery he was told that staff would ask for the fine to be rescinded. Since then he has received seven more letters from two debt collectors and the amount he owes has risen to £160.

Mr Read, of Peppard Lane, Henley, destroyed his original fine notice when he was told by the surgery that they would ask for it to be cancelled so was unable to appeal himself.

He said: “I believe the system itself is flawed, the company is fairly devious and the whole thing is a money-grabbing fiasco. If this did go to court I would defend it.

“The surgeries had an agreement with Smart Parking which gives them the right to request the annulment of any unfair parking charges. Smart Parking has ignored that part of the contract.

“It’s unlikely they will pursue anyone in court because one would hope they would slip at the first hurdle. I don’t have any intention of paying what I consider to be an unjustified fine.”

The Henley Standard has reported how the surgeries were inundated with complaints from patients and their relatives over parking fines.

Some were found to have accidentally typed in their details incorrectly or failed to press “confirm” at the end but often Smart Parking refused to cancel their fines, even when asked to do so by the two surgeries, which were supposed to have the final say. Some patients also complained that the company didn’t recognise the grace period.

The GPs said their staff were spending up to an hour a day handling complaints.

Sarah Moberly and Louise West, practice managers at the Hart and Bell surgeries, said: “We are aware that Smart Parking or their agents are still chasing our patients for fines for which we have requested an annulment.

“This is causing our patients undue distress and we are frustrated that the company will not respond to or acknowledge any communication from us.

“Some of these fines were for patients who had parked within the grace period originally agreed with Smart. In some cases Smart is now threatening court action for fines that are not paid and, although we believe these fines are unfair, the outcome of a court action is never guaranteed so holding out must be at individuals’ own risk.

“However, should it come to that we would provide all the support and evidence that we can. Our preferred outcome is for Smart Parking to address the unfair charges and cancel them for our patients now.”