Hospital may honour man who led battle to save it 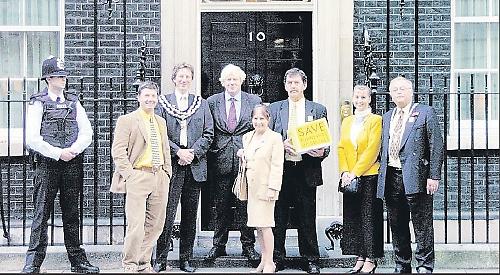 A ROOM at Townlands Memorial Hospital in Henley could be named after a former mayor of the town.

Terry Buckett, who served as a councillor from 1995 until his death in 2009 and was Mayor twice, led a campaign to save the old hospital in 2005.

A room at the £10 million hospital off York Road, which opened in 2016, is already named after Maurice Tate, a Henley man who died following a car crash.

Town councillor Ken Arlett says that Mr Buckett, who was a postman, should be recognised for his efforts and he would be willing to pay for a plaque himself.

He said: “We want a room named after Terry so it can stay there in perpetuity. It’s something to remember him by.

“Terry was the main mover and shaker when the campaign started. He put an enormous amount of work into it and got other people involved.

“If it wasn’t for the likes of him it never would have happened. One of the things he said to me before he died was that he really wanted to see a new Townlands hospital.

“He was a likeable fellow. When he was elected he didn’t count the votes, he weighed them — he was that popular.”

Mr Buckett’s widow Pauline, who served as a councillor after her husband’s death, said: “I know he would have been very proud and honoured for this to happen.

“Terry did work hard on Townlands before he passed, as did I for a few years when I was on the council. I would love it and I feel that a lot of other people in the town would be proud too. People thought a lot of Terry and some say they wish he was still on the council.”

A spokesman for NHS Property Services, which is responsible for the site, said: “We are discussing the proposal with our local NHS partners and members of the Townlands Stakeholder Reference Group.”

The Save Townlands group organised a march around the town in 2005 and delivered a petition containing 11,800 names to then prime minister Tony Blair at No 10 Downing Street.

The campaign succeeded in saving the old hospital from closure and led to NHS plans to eventually redevelop the facility.

Town councillor Ian Reissmann, who chairs the Townlands Steering Group, said: “We have a Maurice Tate room and I’m not sure if there’s another room that’s suitable.

“It will be NHS Property Services’ decision and I’m not that hopeful.

“I’m not a great fan of naming things after people and many people were involved in the Townlands campaign. Singling out one person doesn’t seem the right thing to do.”

The Maurice Tate Room was opened at the old Townlands Hospital in 1973 and was reprovided in the new development.

Mr Tate, who was chairman of Henley Round Table, died as a result of the injuries he sustained in the crash in 1969. His wife Christina, who lost her sight in one eye, died in 2011. The couple’s son David is joint managing director of estate agent Davis Tate.