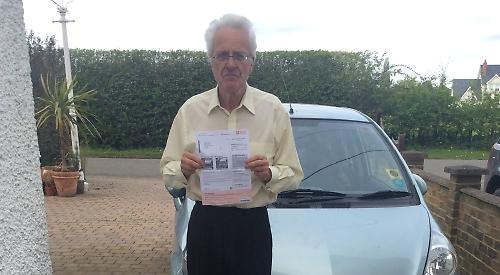 A WOMAN who was issued with four different parking fines at the Townlands Memorial Hospital site in Henley has urged health bosses to change the system.

Nola Hyndman incurred the fines at the car parks of the hospital and Bell and Hart surgeries off York Road, most recently on Wednesday, April 18.

She is one of dozens of patients who have complained about being fined unfairly at the site, which is monitored by parking enforcement company Smart Parking.

Many of them have also been sent letters by debt collectors demanding payment, while others have received solicitor’s letters.

Drivers parking at the hospital must enter their vehicle’s registration details using a keypad in reception.

Smart Parking enforces the car park using automatic number plate cameras and anyone who fails to register, or registers incorrectly, is sent a £60 penalty notice which increases to £100 if it is not paid within two weeks.

The company currently monitors the car parks of the hospital and neighbouring Chilterns Court Care Centre. It was effectively sacked from running the car park of the surgeries in November following complaints from patients.

Mrs Hyndman, 87, of Bowling Court, Henley, says two of her fines, which were issued when she visited the Bell Surgery last year, were cancelled following the intervention of staff but she has had more difficulty with the other two at Townlands.

She said: “The receptionist at the surgery was very good and took it all out of my hands. For one of them I was only there for 10 minutes putting in a prescription request, I was short of the grace period. They were cancelled but you get no apology from the company about being in the wrong.”

Mrs Hyndman said that after receiving the first of the two fines at Townlands earlier this year, she spoke to a receptionist at her next clinic appointment, who offered to enter her details in the keypad.

Despite this, she still received another fine.

She has written to Smart Parking over both her fines at Townlands and included letters from the hospital confirming past and future clinic appointments but her appeal was rejected.

Mrs Hyndman said: “I think the situation there is disgusting. If NHS Property Services have the contract with Smart Parking they must know the number of the people and pressure them into doing something about it. The Bell Surgery didn’t take long to decide they had had enough of the complaints.

“I understand the hospital has problems with people parking unnecessarily to go shopping but that’s minimal compared with the number of people going for legitimate reasons.

“It doesn’t worry or upset me, it just makes me very angry that you have to go to this trouble of proving yourself honest.”

Dr Seymour, 79, regularly attends the hospital for appointments and says he is always careful to enter his registration details.

He said: “I always ask the receptionist if I had done it correctly and she informally confirmed that I had. The difference this time was that I entered the information on the computer keypad rather than the large screen available.”

Dr Seymour spent more than an hour at the hospital and received a fine in the post last month. He immediately wrote to Smart Parking to appeal the fine, as well as contacting staff at Townlands, but has yet to receive a reply from the company.

Dr Seymour said: “I spoke to a friend who had a similar problem with Smart Parking, although not at Townlands. He informed me that they took over a month to reply to his letter, ignored what he had said and upped his fine.

“I am and continue to be an authorised patient of Townlands hospital irrespective of the way the present system is operated. I am therefore exempt from a parking fine which I do not intend to pay.”

Bridget Fraser was issued with a fine which claimed that she had spent more than six hours at the Hart Surgery car park last year.

Mrs Fraser, a writer who lives in Hambleden, visited the surgery and then walked to the Boots pharmacy in West Street to pick up a prescription before returning to her car.

She left the site before 12 noon but was later sent a notice which appeared to show her car still in the car park after 5pm.

Mrs Fraser said: “I’ve got credit card receipts showing I was somewhere else several miles away soon after and I couldn’t get there without my car. This fine should never have been in place, I just drove in and drove out.”

She says she left the surgeries and drove through the Townlands site on her way out, as instructed by arrows painted on the road. But she claims her fine notice shows her car attempting to turn the other way, against the arrow.

Mrs Fraser said: “There’s nothing to say you can’t drive through the site. I didn’t stop or pull up to talk to anyone. Maybe it confused the cameras because I drove in and out so quickly and I’ve been sent a picture of my car going against the arrow. It looks like a mock-up.”

Mary Anderson successfully took Smart Parking to court after they refused to refund a parking fine, which was overturned on appeal.

Mrs Anderson, of Nuffield, was fined while visiting Chilterns Court care home with her therapy dog Monty soon after the new parking system was introduced last year. Her first appeal against the fine was turned down and despite appealing again she decided to pay the fine to stop it being increased to £100.

Mrs Anderson says she then won her appeal but was refused a refund by Smart Parking.

She said: “They said I had accepted liability and I said I hadn’t. They wouldn’t refund me so I took them to small claims court. They paid up my refund within a week plus the £12 court fee. It was online and so easy.”

Mrs Anderson has been visiting Chilterns Court and its predecessor, Chilterns End in Greys Road, for four years and is registered at the home, meaning she should not be issued with a fine when parking there.

A spokeswoman for the Orders of St John care trust, which runs the home, said: “The trust is aware some visitors to Chilterns Court have been fined when parking in the premises, despite following the instructions and signing in at reception.

“We have spoken with individuals who have been issued an infringement notice when visiting Chilterns Court, and are discussing these with Smart Parking to find an appropriate solution.”