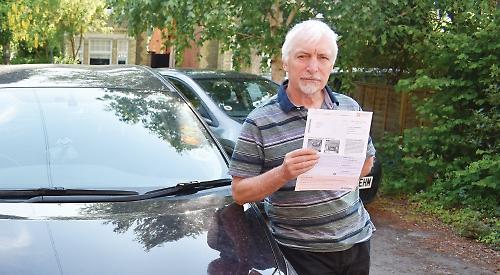 A WOMAN says she was terrified at having to pay a parking fine issued at Townlands Memorial Hospital in Henley while taking her husband for treatment.

Gabriela Bolton, of Lomond Avenue, Caversham, is the latest in a string of patients claiming to have been unfairly fined at the hospital car park.

These have led to calls for NHS Property Services, which owns the hospital, to sack Smart Parking, the company which enforces the car park.

The company, which has already lost its contract for the neighbouring GP surgeries following dozens of complaints about unfair fines, uses automatic number plate recognition cameras to log vehicles entering and leaving the car park.

Visitors have to enter their registration details on a keypad at reception to receive free parking and there is meant to be a 20-minute grace period for those passing through or dropping off patients.

Mrs Bolton took her husband Alastair, who has diabetes and was suffering from a toe ulcer, for a podiatry appointment at the hospital in February.

She entered her car’s details at reception as required so was shocked to receive a fine in the post nine days later.

Mrs Bolton, 65, said: “I felt horrible and terrified that I had to pay £60. To my mind I did what I was supposed to, so I appealed and told them I might have made a typo or not pressed ‘OK’ enough times. When you use it for the first time you don’t know.”

Smart Parking rejected her appeal, saying her car was in the car park for more than half an hour and there was no record of her details having been entered. Mrs Bolton said: “I didn’t dispute the fact that I was at the car park. I was telling them that the system isn’t easy when you encounter it for the first time. You may miss things if you are anxious about an appointment.”

A second appeal was rejected by the Parking and Private Land Appeals service, which said the company’s logs showed Mrs Bolton had entered her details correctly on previous occasions.

Mrs Bolton says this was not true as it had been her first visit but she paid the fine, which by then had risen to £100.

She said: “I was so frustrated, annoyed and in tears. I was appalled by the fact that they wouldn’t listen. We were there on legitimate business, tried to register and made a mistake. This will happen to other people again and again.”

Mr Bolton, 59, said: “It’s a con as we were there legitimately. You could understand if people were parking there and going round the corner to work but it seems unfair that we should be penalised.

“It’s not a simple system and catches out a lot of people who haven’t used it before.”

Mrs Bolton has been back to the hospital with her husband twice more since her fine and says she sometimes registers more than once to be sure her details have been logged.

Steve Waite was fined after taking his 86-year-old mother Muriel to the hospital in May.

He says he was in a rush and didn’t enter his details as he didn’t notice the signs telling him to do so.

Mr Waite, who is retired, said: “It was late in the afternoon and the car park was empty. We went straight to the appointment because we had been stuck in traffic and got there dead on time.

“It’s not somewhere I go often. Last time I was there they were still building the hospital and it was free to park. I don’t know if I am particularly unobservant but I didn’t see a single sign.”

He is planning to appeal against his fine using proof of his mother’s appointment.

Mr Waite said: “Everyone with a legitimate appointment should win their appeal. People going to the hospital have their minds on other things. There needs to be a little bit of sympathy.”

Gordon Claridge was fined after taking his wife Anna for a podiatry appointment at Townlands on May 15.

Mr Claridge, of Vicarage Road, Henley, says he spent about half an hour at the car park and was careful to enter his details on the keypad, even being warned by the receptionist that he would have to ensure the final box was ticked in order to validate the parking.

Mr Claridge has appealed but has not heard back from Smart Parking.

He said: “I was shocked and amazed they hadn’t told me what I’d done wrong.

“I haven’t even had the courtesy of notification of receipt of my appeal. There’s a certain arrogance. Unless they give me a good reason I’ll be taking it further.

“I’m not going to pay and I feel as though I’m wasting my time. I should send them a bill for £60 for my time!”

Mr Claridge, who is retired, says he supports parking enforcement at Townlands but not in its current form.

He said: “There has got to be control of the car park but there are ways and means.”