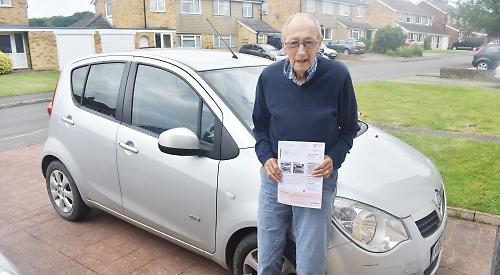 A COUPLE were fined for parking at Townlands Memorial Hospital in Henley when they left just seconds after the 20-minute free grace period ended.

Fred and Margaret Curzon, of Orchard Avenue, Sonning Common, are the latest in a string of patients to be caught out by the parking enforcement system at the hospital off York Road.

Dozens of patients have complained to the Henley Standard about being issued with unfair fines of up to £160 and many have been sent letters threatening them with court action if they refuse to pay.

This has led to calls for NHS Property Services, which owns the hospital, to sack Smart Parking, the enforcement company which has already lost its contract for the neighbouring GP surgeries following dozens of complaints.

Mr Curzon was driven to the hospital by his wife last month to have a chest X-ray. He was unable to drive as he was awaiting eye treatment.

The couple entered their details on the keypad with the help of a receptionist, so they were shocked to receive a fine in the post less than two weeks later.

The notice said they had left 24 seconds after their 20-minute grace period had expired.

But Mr Curzon, 80, said they should have been allowed to stay in the car park for longer anyway as they had registered properly.

He said: “I can’t actually see what we have done wrong.

“We parked in the normal position in a proper parking space and we can’t possibly have exceeded the time limit.

“I’ve been before in my car and possibly hers too so I knew you had to register the vehicle. We were pretty sick about the fine because we went there for a specific reason.”

Mrs Curzon, 73, added: “I was flabbergasted and couldn’t believe it.”

The couple have appealed against the fine and say they have no intention of paying.

Meanwhile, Patricia Hallett was issued with a fine despite spending just 12 minutes at the car park when picking up her husband Edward from an appointment.

Mrs Hallett, 76, from Twyford, said she had to go into the hospital as her 81-year-old husband was having problems with his hearing aid but wasn’t able to park in the pick-up zone.

She appealed against the fine but was turned down, although staff at the hospital have said they will take up her case.

Mrs Hallett said: “It’s very stressful when you have enough stress at the hospital as it is.

“Some people have told me they are scared to park there. I’m very cross. I’d much rather there was a car park where you pay money which goes straight to the NHS. That’s a much better idea than letting some private company do it. They are out to make money.”

Terry and Janet Smith were fined after visiting Townlands in April. The couple, who live in Whitehall Lane, Checkendon, and run TS Cars & Son in Woodcote, spent about 45 minutes at the hospital as Mrs Smith had an eye appointment.

Mr Smith entered his car’s details on the keypad and said he had no idea he had done anything wrong until he received the notice in the post.

He said: “It annoyed me immensely. We needed to be there. My wife couldn’t drive and couldn’t even see when she came out.”

Mrs Smith added: “We’ve been reading about this in the Henley Standard so were aware of it but surely you’ve got to be able to park in the hospital car park if you have an appointment.”

The couple appealed against the fine with proof of Mrs Smith’s appointment but this was turned down. They say they have no intention of paying.

Mr Smith said: “I won’t pay, I don’t care what happens. As far as I’m concerned, I was within my rights to be there.”

Last week, the Henley Standard revealed that NHS Property Services will hold a meeting next month to discuss the future of the parking scheme.