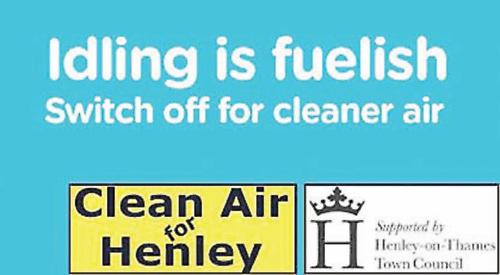 Members of Clean Air for Henley measured the levels of nitrogen dioxide, which is mainly caused by vehicle exhausts, in five locations over four two-week periods between March and May.

They found that Northfield End was the worst affected area with the levels exceeding Air Quality England’s target limit of 40 micrograms per cubic metre on several occasions.

This is far higher than South Oxfordshire District Council’s last official measurement taken in Northfield End in 2015 that showed a mean annual concentration of 28.1μg/m3.

In Duke Street — previously the worst affected area — the levels exceeded 40μg/m3 in three out of the four tests.

Clean Air for Henley also took readings in Vicarage Road, where the levels didn’t exceed 16μg/m3 in any test, and in Reading Road and River Side.

David Dickie, who is leading the campaign, said the findings showed that places like Northfield End needed to be taken into consideration when considering solutions to the town’s traffic problems.

He said: “The air quality management area ends at the bottom of Bell Street and I think it should be extended to Northfield End and at the other end of town to Wilson Avenue. I think it should also include Greys Road.”

Mr Dickie said that when traffic backed up from the bridge drivers were brought to a standstill in Northfield End, Fair Mile and Marlow Road.

“You’re stuck and everyone’s just sitting there and idling,” he said.

Clean Air for Henley has also written to bus companies Arriva and Thames Travel seeking a commitment that their drivers will switch off their engines when they are stationary at the bus stop outside Starbucks in Bell Street.

Mr Dickie said: “Both have said that if the bus is there for more than a few minutes the driver should switch off their engine.

“But I’ve had a lot of people telling me that when they approach bus drivers they say, ‘go away, I’m not doing that’ and that should not be allowed and should be reported.

“The companies say that should not be happening.”

He said people could report rogue drivers to the companies’ customer service manager.

To mark National Clean Air Day yesterday (Thursday), the group joined campaigners in other towns and villages in Oxfordshire in sending a postcard asking for a clean air charter to county council leader Ian Hudspeth.

The Henley campaigners also visited businesses in the town asking them to display a “no idling” sticker in their windows.

Clean Air for Henley is part of environmental campaign group Henley in Transition and has received funding from Henley Town Council.

The council’s own transport strategy group has been investigating measures to improve the town’s air quality in the town, including:

• Introducing a 20mph zone for the town centre as well as more cycling and walking routes.

The council has also agreed a deal for a new bus service from Reading Buses starting next month using a bus powered by biomethane gas.

Clean Air for Henley campaigner Patrick Fleming, who is on the strategy group, said: “For me, the biggest issue is particulates and the fact the district council has avoided measuring them for all these years.

“Yes, it’s good that they are measuring nitrogen dioxide and we have an air quality management area but don’t just keep measuring, have actions to do something about it.

“This campaign is about people of the town seizing the initiative.

“We have spread it out and into areas where we think there are problems which the district council is not addressing.”