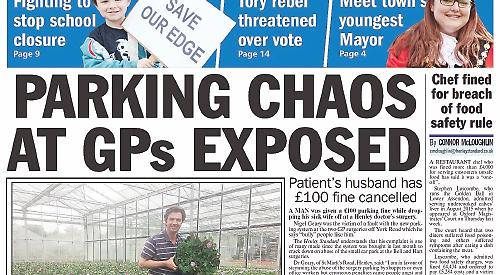 VICTIMS of unfair parking fines issued at Townlands Memorial Hospital in Henley are celebrating the departure of the enforcement company.

Last week, the Henley Standard reported that NHS Property Services, which owns the site off York Road, is tendering for a new company to run all its car parks nationwide.

This will not be Smart Parking, which has faced repeated calls to be sacked from Townlands following complaints from patients, as highlighted by the Henley Standard’s Not Very Smart Parking campaign.

Health minister Stephen Barclay said the company’s performance “has not been satisfactory”.

Smart had already lost its contract to monitor the car park for the neighbouring Bell and Hart surgeries following scores of complaints about unfair fines.

Patients and relatives who have been caught out by the company’s system welcomed the news.

Sarah McCaugherty, whose mother Susan Allen, from Reading, was fined after visiting the hospital earlier this year, said: “When we told my mum we were cheering. Smart deserve everything they get.

“This upset my parents and caused them lots of worry and stress thinking that debt collectors could be knocking on their door anytime.

“This company is terrible and caused lots of unnecessary pressure and stress to lots of people.”

Mrs McCaugherty had driven her mother and stepfather John Channon to the hospital in her mother’s car and parked in a disabled bay using Mrs Allen’s blue badge.

The family spent about an hour at the hospital before moving the car to King’s Road car park so they could go shopping.

Mrs Allen received the fine a few days later but contested it and the charge was finally rescinded last week.

Mrs McCaugherty said: “We are happy that it has been sorted. It is a weight off my mum’s mind.”

Ian Reynolds, who was fined £60 in June after taking his wife Ailsa for an X-ray at the hospital, said: “I’ll be more at ease going there now.

“The company gets most of its profit from fines and that tells its own story. My wife is having treatment at Wallingford Community Hospital and they have a simple pay and display machine. Why they couldn’t do that at Townlands I don’t know.

“The NHS should have researched this company first. I just feel bad for the old and vulnerable people who paid these fines because they were scared.”

Chris Hannaford was fined in February after visiting the hospital to see a cardiologist.

He contacted hospital staff and had a cheque ready to send to Smart Parking before Stephanie Greenwood, the Royal Berkshire NHS Foundation Trust’s Townlands service manager, helped him have the notice cancelled.

Mr Hannaford, from Twyford, said: “I sent Smart a copy of my appointment letter and they had the audacity to say I didn’t qualify for free parking.

“When I saw your article last week I was so delighted that they have been exposed.”

Visitors have to enter their car registration details using a keypad at reception to receive free parking and there is meant to be a 20-minute grace period for those passing through or dropping off patients.

Scores of patients, some of whom are elderly, have been issued with parking fines of up to £160 for parking despite following the rules and some have been sent letters threatening them with court action if they refuse to pay.

Ann Dayton, of Kennylands Road, Sonning Common, was fined after lawfully parking in a disabled space at the hospital in May.

She asked a member of staff to enter her details using the keypad as she couldn’t reach it but she was still sent a £60 penalty notice less than two weeks later.

She refused to pay the fine, which increased to £160, and later received letters from debt collectors. Her fine was eventually cancelled after she complained to NHS Property Services.

Mrs Dayton said: “If they are sacking Smart Parking it’s not a moment too soon. They should have done it ages ago, knowing that the surgeries had sacked them.

“Their treatment of those people parking legitimately was disgusting.

“There is a lot of disgruntled people who unfortunately paid the fine after the intimidation and they should be refunded.

“Fortunately I’m a tough old bird and I won’t be intimidated by anyone, especially when I know I’m in the right.”

Gordon Claridge was fined after taking his wife Anna for a podiatry appointment at Townlands in May but appealed and was successful.

Mr Claridge, of Vicarage Road, Henley, said: “I would just like to thank the Henley Standard for highlighting the problem and also Townlands for their help.

“Smart Parking did not pursue their ‘fine’ in my case but I am still unaware what contravention of their rules I was accused of.”

Mr Barclay told Henley MP John Howell that the new contractor was due to be appointed next month and Townlands would be transferred to it “in due course”.

Health chiefs must give Smart Parking 90 days’ notice, meaning the company will continue enforcing parking at Townlands until December at the earliest.

Until then the current parking rules will continue to apply at the hospital car park.

The firm was fired from a similar arrangement at Aldershot Centre for Health in May.

• The headline above last week’s front page lead story should have read “Victory: parking firm facing sack” but the first word (in orange) did not print due to a technical problem for which we apologise.