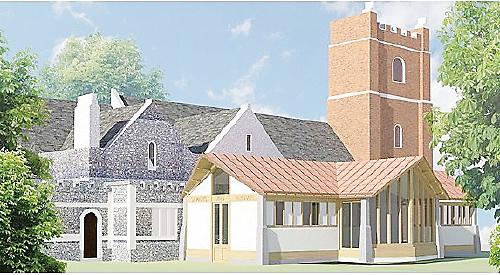 THE construction of a new £400,000 annexe at St Mary’s Church in Wargrave has passed the halfway stage.

A full outer shell with wall panels and a roof have been installed and the structure is now ready for interior fittings including ceilings and a kitchen.

The new building is expected to be available for full use by the community by Christmas.

This is despite a delay at the start of the build in January
when human bones believed to be from the Middle Ages were discovered about 1m underground in the churchyard where the annexe was due to be built.

Work had to be halted on the first day as about 90 skeletons were exhumed, cleaned and catalogued before being reinterred elsewhere in the churchyard.

Architect Nick Rule said that since then work had progressed steadily.

He said: “We are at the very tail end of the shell structure. The roof took a little while to put on in the heat but we are there and it looks magnificent.

“We are just about to start fitting out the interior with the kitchen and ceilings.

“There are discussions about fitting it out with equipment and we are still raising donations for the final batch.

“The target to do it by is Christmas.”

The workmen had to contend with wintry weather at the start of the build followed by the heatwave over the summer.

Mr Rule said: “It was quite unpleasant digging in the ground when we had the ‘Beast from the East’ and since then the weather has been largely hot.

“On a couple of occasions we had to pull off the roof because we were roasting the roofers!

“But we can’t blame the weather for anything. We’ve tried to do a bit of catching up and we are on track.”

The annexe will be called the St Mary’s Church Centre and will contain two meeting rooms, a café and toilets as well as providing access to the church via the north porch.

It will provide a meeting place for community groups such as Mill Green Women’s Institute, which currently uses the nearby Hannen Room, and increase capacity for church functions.

The annexe is the latest stage of the 21st Century Project to modernise the church. The entire project will cost more than £600,000, which has been raised via collections, events and grant applications over the last five years. Money for the interior work is still being raised.

Peter Mayes, a member of the parochial church council, said: “We’ve got the money to complete the fit-out in its basic form but it’s the quality of finish we are looking for. The more money you’ve got the better you can do. We want to do it to a high standard.”