We must stop lorries doing this 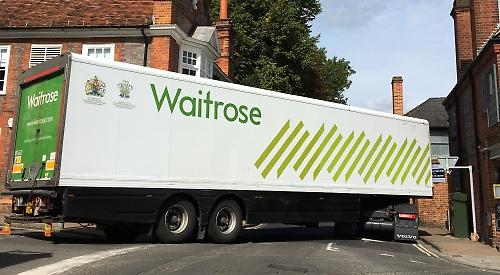 CAMPAIGNERS have called for stricter rules on heavy goods vehicles driving through Henley after a lorry got wedged in a town centre road.

The Waitrose lorry was attempting to negotiate the junction of West Street and King’s Road near the town hall when it got stuck.

This led to long tailbacks around the one-way system in the town centre on Monday last week.

The driver told onlookers, including town councillor David Eggleton, that he had missed the turning for the King’s Road car park and had attempted to turn around in West Street when he got stuck.

He spent about 15 minutes manoeuvring the lorry until he was able to take the corner and make his delivery to the supermarket nearby.

Councillor Eggleton said: “The lorry wasn’t supposed to go that way — they normally go in the top end of the car park — but he missed the turning. He thought it was further down and was trying to come back around.”

Cllr Eggleton said the driver was impeded by cars parked on double yellow lines outside the town hall.

He said: “If they weren’t there he could have got round. I moved cars back up to clear the road so he could get through and manoeuvred him round. He eventually got through by a couple of inches.”

He said the driver was lucky that a fire engine wasn’t called out to an emergency from the fire station in West Street.

Cllr Eggleton added: “We need to have a sign at the top end of West Street which says there is no lorry access because sat-navs take you all over the place and we don’t want more incidents like this.

“Let’s keep the big lorries to the main roads and not the side roads.”

Clive Hemsley, of Hart Street, Henley, was one of the drivers stuck in the queue behind the lorry when it got stuck.

He said: “There was a lot of angry people. I think we ought to be planning a weight restriction on Henley Bridge, maybe using the power of a petition. It wouldn’t be like Marlow Bridge, where even a Land Rover can’t go over, but there should certainly be a restriction on lorries.”

Dave McEwen, of environmental campaign group Henley in Transition, said: “You can have potentially devastating consequences if you are trying to go round ridiculous corners and it puts pedestrians’ lives at risk.

“But even if you have a ban on lorries travelling through the town you are still going to have deliveries to places like Waitrose. The focus has to be on keeping out those HGVs that are not supposed to be here and are coming through the town. That’s the problem.”

Last year, Henley Town Council said it would consider a night-time ban on heavy goods vehicles as part of measures to ease congestion and improve air quality in the town.

Levels of nitrogen dioxide in some streets is 50 per cent higher than Air Quality England’s target limit of 40 micrograms per cubic metre.