Residents asked to pay for restoration of mermaid statue 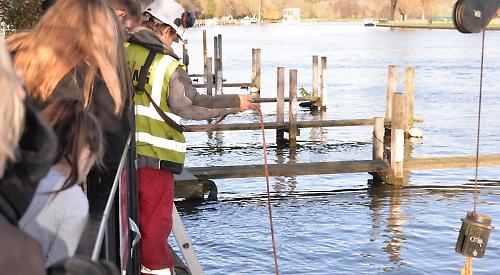 RESIDENTS of Henley will be asked to help fund the restoration of a mermaid statue at the riverside.

The 6ft 6in bronze sculpture on Red Lion Lawn has been on loan to the council since 2013 and was supposed to be sold after five years and replaced with another piece.

Henley Town Council contacted the owners about the cost of re-instating the statue after it was vandalised in November and was told they would prefer the council to buy it.

The bronze was ripped out of the ground and thrown into the river before being hauled out several days later.

Since then, it has been kept in storage pending its restoration.

The statue was originally supposed to be sold for at least 15,000 euros with 5,000 going to a local charity but this has now been reduced to an overall total of 5,000 euros, about £4,455, and the council will to try to raise this by crowdfunding online.

It is hoping local people will donate small amounts in return for a certificate which says that they “own” part of the sculpture, or “ama”.

Councillor Sam Evans told a meeting of the council’s town and community committee that there was a “genuine feeling of love” for the mermaid and people wanted to save it.

She said: “It’s quite obvious that the people of Henley want the mermaid to return and the best way of doing that is to encourage as many people as possible to buy a little bit of her.

“It will give the town a sense of ownership and make people a bit more protective of her and aware if people are doing anything dodgy.

“Whether you give 50p or £50, you will get a certificate saying you’ve helped save the mermaid. We’ll make it a bit of fun.

“Let’s get the shops involved — they can put up posters in the window and certificates if they donate.”

Councillor Will Hamilton said: “I think it’s a great idea and crowdsourcing is a great initiative. Let’s give it a go and make it happen.”

Councillor Lorraine Hillier said: “It’s worth a try but if you don’t reach the target we are back to square one.”

Niki Schäfer, who chairs the Henley Business Partnership, said: “The partnership is happy to promote the idea to local businesses.

“It’s a beautiful statue so I’d hope that businesses would support it. I’m sure they will offer window space for posters and promote it to the community.”

The town council agreed a contract with Koh i Noor, a German company that donated the sculpture, in February 2013.

The 370lb statue was designed by French artist Amaryllis Bataille and has an engraved plaque which reads: “Ama of the Thames, Henley-on-Thames. Latitude 51.537699, Longitude. 0.901276.”

Ama is the name given to the Japanese and Korean women divers, or “ladies of the sea”, who are famous for diving and collecting pearls. Henley was one of 20 locations around the world chosen to have a statue as a “place of beauty near water”.

The statue was first offered to the town in 2012 but caused a split among councillors and residents.

It was vandalised last year when it was dumped in the river together with umbrellas and awnings on the lawn, while tables were left upended and broken.

Staff from Hobbs of Henley retrieved the awnings and umbrellas but were unable to pull out the statue as it was too heavy.

Experts from Cook Piling, of Hurley, had to pull out the sculpture using specialist equipment.

It was then taken away by the council’s parks services team.

Earlier this year, the council was offered the statue at a reduced fee of about £8,800, minus £780 salvage costs.

The owner indicated that the change of heart was due to “personal” reasons.