My dog is so petrified of fireworks that he’s sick 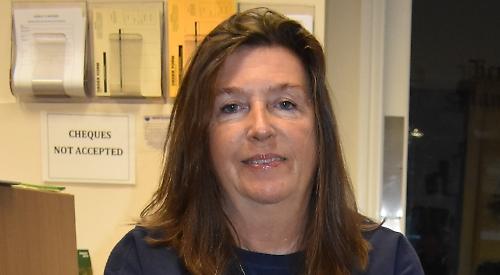 THE manager of the Henley Show has called for a ban on private fireworks displays in people’s gardens.

Jo Taylor was responding to the Henley Standard’s Ban the Bangs campaign to encourage the use of quiet fireworks and for people to attend official displays rather than staging their own at home.

She says she has been unable to go out on New Year’s Eve for eight years as her deerhound lurcher Flynn is so scared of fireworks that he shakes and even vomits.

Mrs Taylor, who is manager of the Henley and District Agricultural Association, says she has tried sedatives on the eight-year-old dog but he is so terrified of the noise that she has to stay at home and comfort him.

Mrs Taylor, who lives in Deanfield Avenue, Henley, said: “He’s absolutely petrified. He shakes himself into such a state and is physically sick.

“I’ve tried herbal sedatives but it doesn’t seem to help. Lurchers are not particularly good with medication as they are large and thin and can react badly.

“I have to sit with him and keep stroking him but even that doesn’t make much difference. There’s nothing I can do to settle him.

“He also seems to get worse as he gets older.”

Mrs Taylor says she hears fireworks being let off near her home throughout the year and believes the perpetrators are sometimes youngsters at Makins recreation ground nearby.

She said: “Fireworks are not just on Bonfire Night and New Year’s Eve, they start before and carry on all the way through. The police and council don’t seem to be able to do anything about it.

“I believe people should go to organised displays and that setting them off yourself shouldn’t be an option. The shops selling the fireworks should be policed. In the wrong hands fireworks are dangerous and there should be stronger legislation.

“Other dog owners are in the same situation and we speak to each other but nobody else cares. People say they don’t care because they don’t have a dog.”

Mrs Campbell and her husband Paul have six ponies and three dogs as well as poultry.

She said she often had to cope with unexpected displays near her home which frightened the animals.

She said: “I feel very strongly about fireworks. I think the noisy ones are unnecessary and they are unfair on wild and domestic animals and elderly people. It’s antisocial behaviour.

“About two weeks ago there was a sudden fireworks display and the noise was disgraceful. The next day I found rocket sticks about 3ft high in my garden.

“We’ve also had a neighbour do a fireworks display without warning anyone.

“It’s also about picking up the litter from the displays. It took a week to clear up the last lot and I know quite a lot of neighbours were not happy.”

Mrs Campbell said the noise from fireworks made her ponies skittish and they could hurt themselves.

“You don’t want the ponies to be frightened because there are fences they can run into,” she said.

She recently took on three rescue ponies from the Blue Cross charity.

She said: “Two are Shetlands and are incredibly nervous. I’m working with them as much as I can to get them handleable. They are 10 and 11 so they’ve heard fireworks before but they do worry me.”

Henley MP John Howell said he would encourage people to go to organise displays rather than letting off their fireworks at home.

He said: “I can understand why people want to have their own displays but the bigger ones give you the chance to work together as a town or village and should be encouraged. What we need is for people to use intelligence, common sense and courtesy.

“There is something exciting about the bang going off but quiet fireworks are clearly just as attractive.”