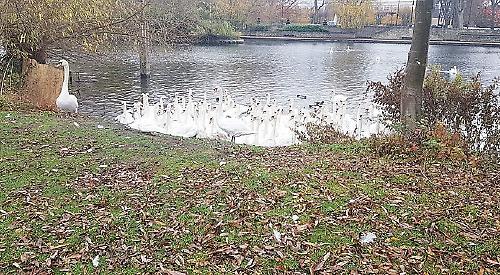 THE public have been urged to keep feeding swans bread after a severely underweight bird was found dead in the River Thames in Caversham.

The animal, which weighed just 4.8kg, was found on the bank near Reading Rowing Club. A healthy swan of the same size should weigh about 9kg.

Swan Support, a rescue centre, says dozens of other swans on the river are also underweight and may not survive the winter.

It blamed a campaign to stop bread being fed to the birds, which they say has scared off members of the public.

It is urging people to feed the swans bread and grain to help them gain weight as the birds will not venture further away in search of food.

Wendy Hermon, of Swan Support, said: “We weighed 24 swans and three-quarters were underweight. A big-framed bird could be 12kg or 13kg but we’ve been picking them up at 8kg. The one we found dead was 4.8kg, when it should be around 9kg. It had died on the bank — no fox got it.”

The Ban the Bread campaign was started by pet food brand WildThings and rescue charity Swan Lifeline in May.

It claimed that feeding bread to swans and other waterfowl caused them problems including:

• Accelerated muscle growth from the high starch content, which can cause a condition called Angel Wing where the wings drop open.

• Discouraging the birds from foraging for food and overcrowding in popular feeding areas.

• Damage to the ecosystem from bread sinking to the bottom of the river or pond.

• Attracting pests such as rats, whose urine transmits Weil’s disease, which is potentially dangerous to humans.

• The growth of a mould called aspergillus, which can cause potentially fatal lung problems in birds.

Mrs Hermon said: “Ban the Bread has been going on for a few months and people have been scared to feed the birds.

“A flock like Reading’s will have been fed bread for a long time by members of the public but they have been scared off and the swans, which rely on bread, are dying.

“We are advising people to please keep feeding them swan pellets but don’t stop with bread, which is what they are used to.

“What’s worse: feeding them something bad for them or seeing them dying?”

David Barber, the Queen’s official swan marker, who lives in Henley said bread was not harmful to swans and that taking it away from birds who are used to it actually increases their risk of illness and death.

He said: “Swans have been fed bread for many hundreds of years without causing any ill effects.

“While bread may not be the best dietary option for swans compared with their natural food such as river weed, it has become a very important source of energy for them, supplementing their natural diet and helping them to survive the cold winter months when vegetation is very scarce.

“There is no good reason not to feed bread to swans, provided it is not mouldy. Most households have surplus bread and children have always enjoyed feeding swans with their parents.

“The Ban the Bread campaign is already having a deleterious impact upon the swan population. I am receiving reports of underweight cygnets and adult birds and a number of swans from large flocks have begun to wander into roads in search of food. This poses the further risk of swans being hit by vehicles.

“Malnutrition also increases their vulnerability to fatal diseases like avian flu which has caused the deaths of many mute swans and other waterfowl in the past.”

Caroline Simpson, a trustee at Swan Lifeline, said: “We have not released any swans into the flocks in Caversham since last autumn as at that time it was with some concern that we noticed he health of the flock in general was deteriorating.

“We believe a major contributory factor is a direct result of inappropriate feeding. The flock sizes in this particular area is unsustainable and natural food sources are at a minimum.

“We believe in feeding swans a correct diet suitable for their species. This may include small amounts of good quality whole grain bread but we would rather see cabbage, peas, lettuce, corn and specialised foods.”