Schoolgirl to protest over climate change 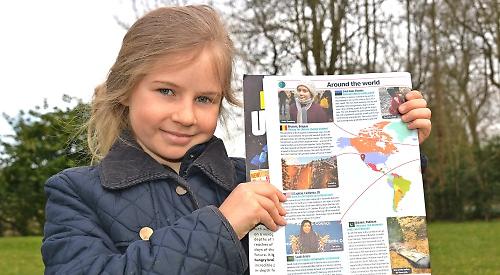 A GIRL from Henley and her friends are to protest about climate change in the town centre today (Friday).

Grace Gubbins, who attends Sacred Heart Catholic Primary School in Greys Hill, will stand outside the town hall with her classmates carrying banners and flags to raise awareness of the problem.

The 10-year-old was inspired by the efforts of Swedish teenager Greta Thunberg, who organised the world’s first school strike for climate change outside her country’s parliament building last year.

Grace, of Crowsley Road, Shiplake, read about Greta in The Week Junior, a current affairs magazine for children, and also watched videos on the topic as part of her school’s “healthy planet, healthy me” syllabus. She wants to make a difference as she is worried for the planet’s future if global temperatures keep rising.

Before moving to Henley with her mother Katherine and eight-year-old sister Georgina in late 2017, the family lived in Switzerland and visited the Aletsch Glacier, which is receding by 12m every year.

They returned last month and witnessed the aftermath of the Crans-Montana avalanche, which killed a skier. The cause is still being investigated but melting snow is thought to be a factor. Grace wants as many people as possible to drive electric vehicles rather than diesel ones as this would reduce emissions which trap the sun’s heat in the atmosphere.

She says all buildings should be insulated to the highest standards to reduce energy consumption through heating while supermarkets should stop packaging their products with plastic.

Producing the substance generates “greenhouse” gases and it doesn’t decay after being discarded so it pollutes oceans and other habitats.

Grace originally wanted to protest outside the Houses of Parliament but decided to do it in Henley from noon to 1pm, which is the school’s lunch hour, to avoid disrupting her classmates’ education.

Her event will be among hundreds taking place around the world as part of a “youth climate strike”.

Grace said: “I’ve sent the word out and we’ll just have to see who comes. So far people have been saying it’s a great idea and I’m hoping lots of them will be there.

“Two other children in my class read The Week Junior and another does a lot to raise awareness of rainforests being cut down for palm oil so I think young people are very concerned.

“The world’s deserts are also getting drier and expanding. It affects so many places around the world and will keep getting worse unless we face the problem.

“If I have any children I don’t want to have to explain to them what polar bears, penguins or glaciers were because they’ve all gone.

“This is important because they won’t be there if we carry on the way we are.”

Grace supports the Refill Henley campaign, launched by resident Julia Carey and town councillor Sarah Miller, in which participating businesses agree to refill visitors’ water bottles free of charge. Mrs Carey also wants the town’s supermarkets to trial a “plastic-free” aisle with fruit and vegetables for people to take away in their own containers.

Grace said: “Whenever we go shopping we try to avoid plastic but it’s really hard. You would think they could put milk in glass bottles or even cardboard containers, which are recyclable.”

She hopes to organise more protests and will also discuss her concerns with the town council and environmental groups like Henley in Transition, which is campaigning on issues including reducing emissions in the town centre.

Mrs Gubbins said: “It’s important that Grace knows she has a voice but at the same time I didn’t want this to disrupt her studies.

“We didn’t want to cause problems for the school as sometimes you have to work with other people to get things done.

“It’s very brave of her to take a stand for what she believes in. I’m so proud that she’s read up on the problem and decided to do something about it.”

ARTIST Mark Draisey is to hold a sale of ... [more]