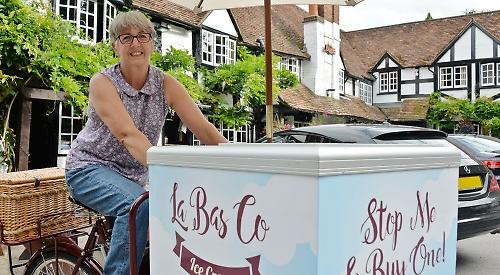 SONNING residents are clubbing together to help an ice cream seller whose specially-adapted tricycle was stolen.

Kathy Drogemuller, who lives in the village and has a pitch near the Coppa Club restaurant at the Great House, discovered the vehicle was missing from its storage yard when she went to collect it on June 27.

Now her friends, neighbours and regular customers have launched an online appeal to raise £2,000 for a new one. They have so far raised more than £850 and hope to hit their target in the next few weeks.

Mrs Drogemuller is still trading from an identical tricycle which she purchased as a back-up but will need a second which her grown-up children can run on busier days and at private events.

The 57-year-old, who founded La Bas Co after being made redundant from her IT job in 2017, has been told her business insurance won’t cover her loss because it does not count as a vehicle.

She has ordered another out of her own pocket which must be customised to be able to take a battery-powered freezer and this should arrive by the end of the month.

The campaign was launched by her friend Caroline Kuipers, who lives in the village and has known her for about six years, and publicised by residents Guy Falkson, who runs the Sonning Buzz Facebook group, and Richard Bellenger.

Donors include nine-year-old Jasmine Bushnell, the daughter of Mrs Drogemuller’s friend Donna Bushnell, who gave £2 from pocket money she had saved up. There have also been donations of £50 and £100.

Simon Flowers, who gave £50, said: “Good luck Kathy, extra sprinkles please when you get back up and running” while Nicholas Houlton, who gave the same amount, said: “Looking forward to you being back on your feet.”

Ms Kuipers said: “Kathy is so lovely and one of those people who’s a real centre of the community. She contributes so much and I really wanted to help her.

“She always gives away ice creams free of charge at the annual Posh Picnic and she did it this year even after the theft, which shows her incredibly generous spirit.”

The tricycle was likely loaded on to a van or lorry as it is unsafe to ride on the roads because of the weight of the freezer.

Mrs Drogemuller reported the theft to police but doesn’t expect to see it again. She said this week: “It’s absolutely marvellous that the whole community has come together and got behind me. I still get people coming up to give me a hug and telling me they’re so sorry about the news.”