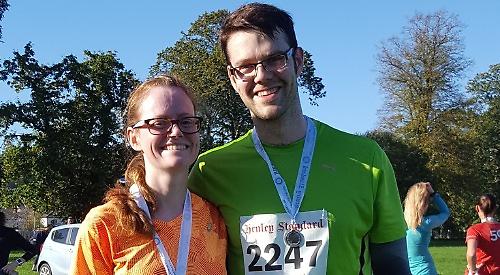 A SELF-confessed “couch potato” from Henley tackled a series of 10km races to raise money in her mother’s memory.

She was inspired by her mother Kathy Whiteman, who underwent a lung transplant at the specialist heart and lung hospital in January 2007 but died of pneumonia aged 60 in December the following year.

The 38-year-old, who lives in Damer Gardens with her husband Mark Bauld, had only previously dabbled with running and came up with the idea after enrolling for last September’s Blenheim Palace 10km with work colleagues.

Mrs Whiteman, a solicitor at Oxford law firm White & Black, had wanted to mark the 10th anniversary of her mother’s death and decided it would be fitting to run nine more over each month that followed.

She ran the Henley Standard 10km, which starts and finishes on Borlase Field off Marlow Road, in October plus the Mapledurham 10km in December and the Woodcote 10km in January. Her final race last month was the Chiltern Chase 10km at Ewelme.

She also took part in the Coventry Memorial Park, Dorney Lake and Brighton 10km races as well as the Royal Berkshire 10km in Reading and the Treehouse 10km at Cholsey.

Mrs Whiteman, who was accompanied by her husband at the Henley and Dorney Lake races, ran several while wearing a bee costume as she has a treasured photo of her mother wearing a similar outfit in support of the BBC’s Children in Need appeal in 1997.

Mrs Whiteman snr, who lived in Leicestershire, had suffered from lung problems for some time and contracted pneumonia after attending the British Transplant Games in the summer of 2008.

Her daughter, who moved to this area with Mr Bauld in 2013, says that after a lengthy recovery her transplant allowed her to enjoy another year with a good quality of life so she wanted to support the hospital’s work.

She felt running the 10km races would test her physical endurance without being impossible as she had only run infrequently in the past and in recent years had lapsed completely due to work commitments. She ran the Henley Standard 10km soon after relocating and again in 2014 but then did nothing for almost three years.

Mrs Whiteman said: “I’ve tried running on and off as I used to be a journalist at BBC Monitoring in Caversham and back then I had more time for it.

“However, retraining as a solicitor is pretty demanding and exercise has been sporadic since then. I did Blenheim Palace with colleagues soon after I qualified in 2017 and agreed to do it again last year so I had the idea while training over the summer.

“The first race was relatively easy because I had other people egging me on but then I had to find the motivation to keep training two or three times a week.

“Some weeks were easier than others but I certainly wasn’t training like a master athlete and I usually had enough time to recover between races.

“I was able to do some sprint workouts but it was mostly based on distance and it was a challenge to find enough time, especially in the winter, as I’d be getting home at 7.30pm or 8pm when it was dark and cold.

“The hardest one was probably the Mapledurham 10km because it was exceptionally boggy with ankle-deep mud. It wasn’t massively fun but it was quite satisfying to get to the end.

“The Henley 10km was quite difficult because of the steep hill near Fawley but overall it wasn’t too bad because the rest of the course is actually quite flat. I think Woodcote and the Chiltern Chase were also pretty hilly.

“Mark was very supportive throughout it all and I was glad to have him alongside me for two of them. He does a lot of rowing and has a very high general level of fitness although it was still a challenge as he isn’t necessarily built for running.”

She said one of the biggest struggles was finding a suitable bee costume as most were fluffy, which would have become too hot. She eventually found a lightweight acrylic one on eBay.

She said: “Most of the time, the priority was just getting around the course although I think I was the fastest bee at the Chiltern Chase. My best time was 62 minutes and 30 seconds at the Reading run.” She said it was a relief to finish the challenge but she enjoyed it and is considering tackling another.

She said: “I felt slightly sad afterwards but I’m not very good at running in hot weather so now is not a good time to start planning. When the weather cools down, I’ll be thinking about other events where I can crack out the bee costume!

“It was hard raising funds to begin with because it’s not foremost on people’s minds in the middle of winter but I’m pleased to have almost reached my target and will hopefully get a bit more support to get over that line.”

Mrs Whiteman said her father Paul, who still lives in the Midlands, was proud of her accomplishment. She said: “He was very pleased to see me successfully complete it and I’ve also had a lot of support and encouragement at work. On the day after I finished, my colleagues held a mini-party and had a cake made in the shape of a bee.

“I’ve asked for my proceeds to go the the transplant unit because Mum would have died without the operation. It was touch and go for a while afterwards but it allowed her to celebrate her 60th birthday with a good quality of life so the work they do is really important.”