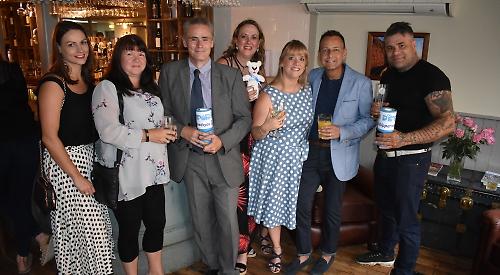 A MAN from Highmoor with a rare form of cancer is “relieved” to have raised the amount required to pay for his specialist treatment in just three months.

Nick Dipper, 51, began immunotherapy treatment two months ago and the cancer has now almost disappeared from his body.

The appeal reached the £140,000 target last week but then Nick and his wife Lisa discovered they owed online fund-raising platforms GoFundMe and JustGiving a collective £5,000 fee.

However they have now raised the full amount following more donations and a fund-raising dinner in Henley at Hof’s Bar and Dining in Market Place.

Mr Dipper was diagnosed with the disease in his pharynx, which connects the back of the nose to the back of the mouth, a year ago. It then spread to his bones, a lung and liver and he was given just a year to live.

He was denied treatment on the NHS because his tumour was in the “wrong” place, so the couple, who have three-year-old twin sons, launched the fund-raising appeal.

Mr Dipper received numerous donations after the story was first published in the Henley Standard in April which allowed him to undergo the pioneering treatment, which helps the body’s immune system recognise and attack cancer cells.

Mrs Dipper, 37, said: “I just looked at the date and it’s two weeks today that we found out that Nick’s treatment is working and to have enough money now to be able to pay for the next lot of treatment.

“The feeling of being secure that there is now enough money to do that and the fact Nick is responding really well to the treatment is just unbelievable. We can’t put into words how much gratitude we have got to the people that helped us. It’s nice to see their money has gone to good use. We have got life and you can’t put a price on that.

“The stresses of worrying about the finances have been lifted. We just wanted to get back to normal life in the sense of not being ruled by cancer every day.

“Nick’s definitely relieved and absolutely delighted — it’s more than what we hoped for at this stage. We still have a long way to go but we are definitely not looking at a death sentence at Christmas.

“The most important people out of this are the children — they’ve got their dad. Obviously he’s my husband and if anything happened life would not even be thinkable without him. But for me the fight was for the boys. I just couldn’t stand the thought of them growing up without him.”

Mr Dipper’s next scan will take place on September 20 at the John Radcliffe Hospital in Oxford where it is hoped he will be cancer free.

Mrs Dipper said: “The specialists can’t believe how quickly his body has responded to treatment. Now the opinion is that if he’s responded this well so far, then by that scan in two months we are expecting it to have gone.”

Mr Dipper’s treatment will last two years and he has started to regain weight, muscle and stamina as his body has got used to it. The cancer has been eradicated from his liver, lung and four out of five bones.

The immunotherapy comprises the administration of drugs via a drip at the Royal Berkshire Hospital every two weeks and the latest treatment took place on Tuesday. He must also travel to Germany every three months for a vaccine specifically made for him and is due there on Tuesday, September 10.

Twenty-seven guests had dinner at Hof’s on Wednesday last week, which was organised by Emma Taylor, from West Street, Henley, and Harriet Barcella, community fund-raiser at the Chiltern Centre for disabled children.

The event raised more than £1,700 through a raffle and auction.

Prizes included a day trip on a Hobbs of Henley 12-man motor launch, organic cuts of meat worth £120 and a meal at the Catherine Wheel in Hart Steet.

Mrs Taylor, 44, who lives with husband Andy, 52, and their children Lilia, 10, and Gabriel, four, said: “The event was absolutely fantastic, there was such incredible generosity from the local community.

“I have got to know Nick and Lisa quite well now through organising it and I think they had a really good time surrounded by people who cared for them and loved them and wanted to support them. It was just such a lovely night and a feeling of celebration, enjoyment and fun, which I think they really needed.”

She added: “They have had such a tough year with all of this hanging over them. Now they will hopefully be able to relax and start enjoying life again without thinking about raffles and auctions.”