Former PM is guest of honour at church centre opening 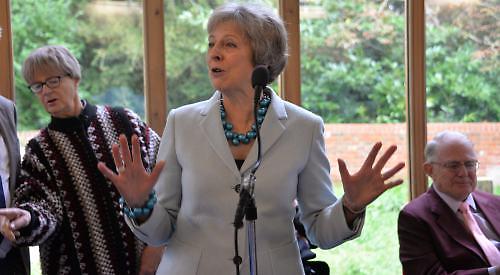 THERESA MAY was the guest of honour at the official opening of the St Mary’s Church Centre in Wargrave.

She was one of dozens of people to attend the ceremony, which followed a service at the church.

The £530,000 building opened to the public in February and is designed for use by community groups.

It will also be used for weddings, baptisms, funerals and other family events.

Mrs May presented a board featuring the names of those who contributed towards the cost of the building to Rev John Cook, the vicar of Wargrave.

The Maidenhead MP and former Prime Minister, whose father was a vicar, said: “Echoing the words from the service today, it is so important that the church is actively wanting to work not just for the church community but for the whole community.

“These things don’t happen overnight. You have been through quite a lot to get here and a lot of hard work has gone in. I can see what a great difference it is going to make.”

Rev Cook said a prayer before thanking everyone who had donated. He said: “I would like to thank Nick Rule, our architect. I can’t tell you the hours he spent doing very hands-on work.

“He was quietly working behind the scenes and on behalf of everyone and I would like to thank him for his labours.”

The annexe was first suggested about 20 years ago. It was finally approved by the Oxford diocese, English Heritage and Wokingham Borough Council in 2016.

The building work took about a year and the excavation of the site involved relocating ancient graves.

The centre has a main space for groups to use as well as a kitchen and toilets. Large windows in the main hall look out onto the churchyard.

Tables and chairs are kept in an adjacent room and a sliding partition will be installed.

The centre is the latest stage of a project to modernise the church.

Lay minister Andrew Ferguson said: “It is not just for the church community, it is for everyone.

“We have raised half a million pounds as a community and the wider project is worth £700,000.

“I would like to thank everyone for the generosity and their patience. There are so many people who have been involved in this.”

Mrs May was presented with a bouquet of flowers at the end of the ceremony.