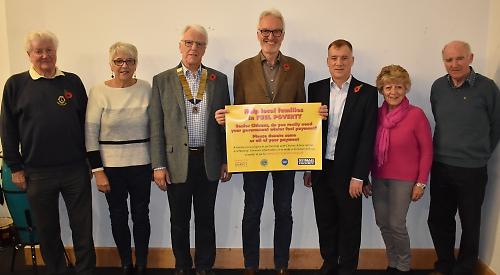 BETTER-OFF pensioners are being asked to give up their winter fuel allowance to help people in need.

Henley Lions Club has launched its fourth annual fund-raising campaign to help local people who are struggling to pay their energy bills.

It works with Henley Citizens Advice, which helps people in debt, and the Nomad youth and community project, which helps families in need.

The government allowance enables people born on or before April 5, 1954 to claim between £100 and £300 to help pay their fuel bills.

In the first three years, the campaign has helped 33 families, a total of 116 adults and children, and 20 individuals who were unable to pay their fuel bills.

Citizens Advice and Nomad identify benefciaries. All the money donated goes towards the cost of heating, lighting and cooking only and payments are made direct to their fuel supplier.

People in fuel poverty are defined as those whose energy bills are greater than 10 per cent of the net family income.

The club launched this year’s appeal at the d:two centre in Market Place, where Nomad is based.

Club president David Skinner was joined by fellow members, Henley Mayor Ken Arlett and Andy Jones, of Citizens Advice, and Sue Prior, of Nomad. Mr Skinner said: “For people who live with their family but are not able to turn on their heating, it will be absolutely life-changing.”

Councillor Arlett said: “This is an excellent idea.

“There are obviously people who do not need the allowance and if they’re prepared to give it to the Lions club, all well and good.”