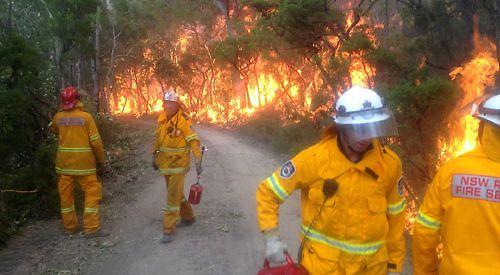 A FIREFIGHTER from Henley is raising money for the Australian bush fires appeal.

Michael Clarke said he was moved by news reports of the disaster and felt an allegiance with his counterparts fighting the enormous fires in New South Wales and Victoria, which have claimed 28 lives, including those of several firefighters.

The 35-year-old, of Reading Road, Henley, joined Oxfordshire Fire and Rescue Service 18 months ago and is a retained firefighter at the fire station in West Street.

Mr Clarke is responsible for the Henley Card, which offers holders discounts at local independent shops, and will be donating half of his profits from January to the appeal. There are about 750 registered holders of the card.

He said: “We tend to sell quite a lot of cards in January and I wanted to help.

“The aftermath of what is happening will be going on for many months, so it is important that we help out. Being 10,000 miles away means we can’t just drive over.

“It is so devastating for the people who have lost their homes and possessions in the blink of an eye. It is upsetting seeing the reporters interviewing people and you can see the tears in their eyes when they have lost everything.

“It must be so hard for those firefighters. I know what putting your life at risk feels like, so it is nice for Henley to be able to help by bringing support to our brothers and sisters over there.”

Mr Clarke joined the fire service in summertime and some of the first incidents he was called to were field fires, including a big one near Shiplake.

He said: “We had a very hot and dry summer and there were lots of fires in the open. We were very busy and at one stage we had three or four shouts a day and each job was very demanding.

“The worst part was when the field in Shiplake was engulfed in a fire and the wind changed, which meant we had to evacuate. Fires generally don’t last long, but the one in Shiplake was very bad. We were there for several hours.

“I was there for six hours but there were lots of other firefighters there afterwards to make sure the fire didn’t start up again.

“We are trained to do all types of situations but you never know what is around the corner.”

Members pay £10 per year, which entitles them to discounts at 55 of the town’s independent businesses.

Mr Clarke said: “I was so fed up of people saying shops were shutting down and I questioned why that was. I approached a few businesses to start with and it has built from there. I am pleased with how it has developed.

“We are not in it for the money and we don’t charge businesses to be a part of it. Many people will make the £10 back in their first couple of purchases.”

The Australian bush fires have affected more than 6.3 million hectares of land and have destroyed more than 2,000 homes.

Every Australian state has experienced fires but the worst affected are those on the eastern and southern coasts, where most of the population lives.

The appeal was started by Australian comedian Celeste Barber on social media and has gathered almost £27 million.

Retired cricketer Shane Warne auctioned his baggy green cap, which he used to wear during Test matches for Australia, for one million Australian dollars, or £691,437.