‘Climate change could lead to Henley-under-Thames’ 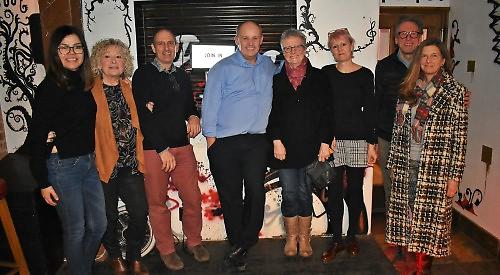 RESIDENTS of Henley have been urged to take part in protests to save the town from the effects of climate change.

Robin Launder, who is part of the worldwide Extinction Rebellion movement, outlined the threat facing the planet during a talk at Magoo’s bar in Hart Street.

The free event was organised by supporters Ed and Maggie Atkinson, of Queen Street, Henley, and attended by about 40 people.

Mr Launder said the town faced severe floods in coming decades because of its riverside location as the melting of Arctic ice is raising water levels globally. He urged the town council to declare a climate emergency.

This would mean it had to consider the environmental impact of all its activities and implement more “green” measures.

Mr Launder said it was vital to stop world temperatures reaching 2C above pre-industrial levels. They are continually increasing, making it harder to reverse.

Many parts of the world would become uninhabitable, killing thousands of species and creating millions of refugees through drought and famine.

Mr Launder defended last year’s XR protests in London, saying the disruption was necessary to draw attention to the issue.

He said all organisations should declare climate emergencies in a bid to reduce net carbon emissions to zero by 2025 and people should cause disruption to convey the message but never use violence.

Mr Launder, a tutor at Eton College, said: “By declaring a climate and ecological emergency, the town council will be making its residents that bit safer.

“Henley is already a town that floods and while we won’t see the wildfires that have affected Australia, there will be more torrential rain so flooding will get worse. If something isn’t done, you could become Henley-under-Thames.

“Even if all you care about is your house price, you should still support this because you can’t avoid what’s happening.”

Mr Atkinson, who was arrested after taking part in the protests in October and is still under investigation, has organised another talk at Magoo’s on Thursday from 6pm.

• The Berks, Bucks and Oxon Wildlife Trust will explain the effects of climate change on local species during a talk at Hambleden village hall on March 26 at 7pm.