How I’ve learned to cope with ‘old person’s disease’ 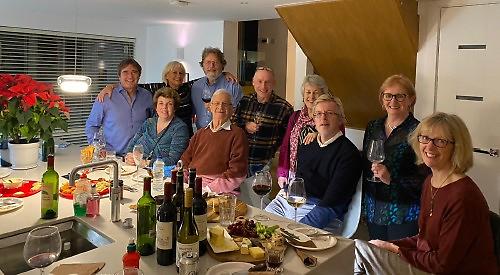 A TEACHER who was diagnosed with Parkinson’s disease when she was 44 has set up a group which brings younger sufferers together.

Lisa Drage, of Deanfield Avenue, Henley, organises a monthly meeting at various pubs in the town centre for other people who were also diagnosed before the average age of 50.

The meeting usually takes place on a Wednesday towards the end of the month and gives visitors a chance to share their frustrations, exchange advice and discuss the latest research into the neurological condition.

About 10 people typically attend but Mrs Drage, who used to run the Dragonflies Montessori Nursery School in Norman Avenue, says there must be more people out there who could benefit.

Now 52, she grew up in Beaconsfield and was working in hotel management when she moved to Henley in the late Eighties.

The mother-of-four retrained as a Montessori teacher in the mid-Nineties and initially worked at a nursery in Chelsea before starting her own school in 2002 and later introducing a session at the Christ Church Centre in Reading Road.

Mrs Drage was diagnosed in 2012 and had to wind down her venture four years later because she needed brain surgery to improve her condition, which had become too severe for her to work full-time.

Parkinson’s causes a gradual deterioration of the central nervous system, leading to difficulty with movement and sometimes mood problems or depression.

She originally sought help at the Bell Surgery in 2010 because she was experiencing unexplained pain, stiffness and shaking in her right arm.

Doctors said it was probably carpal tunnel syndrome, a type of repetitive strain injury, or even an early sign of the menopause but she persisted in seeking help when it wouldn’t clear up.

Mrs Drage was eventually referred to a neurologist who diagnosed Parkinson’s following a physical examination at Townlands Hospital and a brain scan at the John Radcliffe Hospital in Oxford.

She says: “He could see straight away that something was wrong because my arm wasn’t swinging as I walked but I was sent for tests to confirm it.

“They don’t always do scans in older people because the symptoms are so clear but they want to make sure with younger patients. I’ve got it in both sides of my body but at the moment it’s only showing symptoms in the right. About 150,000 people in the UK have Parkinson’s but only four per cent are confirmed before the age of 50, which is pretty low, so GPs don’t expect to see it.

“They’re more likely to assume it’s something else and it can take a long time before they realise that a specialist is needed. Even when you get a referral, there can be a few months’ wait for the appointment.

“I was experiencing stiffness, shakes and trouble getting up in the morning, which is not nice at all and by the time I saw the neurologist I’d more or less accepted it was Parkinson’s from looking online and talking to others.

“You do cling to the hope that it’s something else because it’s incurable but there’s a sense of relief in naming the problem and knowing you can do something.

“I’d had an overactive bladder for some years before that and my urologist says that could have been another symptom. You find yourself looking back and wondering how many early signs there were.”

Mrs Drage’s symptoms are now well controlled as she takes a drug twice a day which tops up her brain’s levels of dopamine, a chemical that is abnormally low in people with the disease, so she can work part-time as a teaching assistant at an independent school.

She had to stop driving when she was first diagnosed as the DVLA wanted proof that she could do so safely.

Now she is back on the road but must be examined every three years to make sure she is not a danger. Doctors must check that her arms and hands are steady and that she has enough sensation in her feet to work the pedals as numbness can eventually develop.

She has regular appointments with a neurologist, psychiatrist, mental health nurse, podiatrist and bladder specialist to cover different aspects of her condition.

Mrs Drage says: “Even after you’ve been diagnosed, there’s still an initial wait for the drugs. The symptoms can get really bad but once you start on them there’s a massive improvement.

“You’ve got to take them regularly or the symptoms will reappear but they’re hugely effective. I’d be very, very disabled without them as it’s like part of your body becomes detached.

“I had really been suffering as I had trouble putting on clothes or even holding up a glass, but at least it wasn’t something worse like motor neurone disease.

“The challenge is in learning to adjust and that’s where meeting other people can be incredibly
helpful.”

Mrs Drage said closing her nurseries was a difficult decision but she had no choice.

She says: “I couldn’t get up on some days and faced the challenge of getting my drugs right so I couldn’t keep working around that.

“It was sad because I loved working with the children but I had to just let it go. I wanted to sell it to somebody who could keep it going but I wasn’t even able to do that because it’s a complex process and I wasn’t well enough.

“There was great support from the community, although many people didn’t understand the full extent of the disease.

“Now I appreciate having a part-time job because it brings some structure to my life and makes me feel useful.

“It has been a very challenging process for my children, particularly when I was first ill and waiting to be diagnosed.

“I don’t have a partner so they felt very responsible and it was a tough time for them.”

Soon after her diagnosis Mrs Drage approached former GP Dr Terry Dudeney, chairman of Parkinson’s UK’s Henley branch, for advice and he put her in touch with Simon Challis, from Cookham, a former Henley resident who was diagnosed at a similar age.

The pair met for lunch and realised they wanted to meet others in the same position so they publicised the idea through the charity and it grew from there.

On top of the monthly meetings, which are attended mostly by people from the Henley area, the group hosts social events such as a Christmas party and a summer
barbecue.

Mrs Drage says: “It works really well because we can discuss our medications and new research or just share our thoughts, feelings and suggestions about living with Parkinson’s.

“Many of us have bladder or bowel problems or have lost our sense of smell, balance or co-ordination so it helps you to feel like you’re not alone, which is a risk when you get it at such a young age.

“It can strike when you’ve still got family and work commitments which you then struggle to meet.

“It’s also just a chance for a fun chat as the trouble with Parkinson’s groups for older people is that it’s quite difficult to see people in such a severe condition. Our group is more light-hearted and allows people to relax.

“Parkinson’s is often seen as a disease of old age. When you talk about it, people say ‘ah yes, my granddad had that’ but it’s a very different disease when it affects younger people. The elderly often experience tremors or a change in how they walk and that’s far less common at earlier ages.

“We don’t usually bring partners unless it’s a social event, which is helpful because although your family trying to support you, it helps to have another outlet to vent.

“My children will ask what’s wrong or check that I’ve taken my drugs but sometimes you just need to have a moan with people who’ve been through what you’re experiencing.”

Mrs Drage says she received several enquiries after the Henley Standard published her letter with a photograph of the group’s most recent Christmas party and one woman has since started attending regularly.

She says: “We just want to keep going as we’re doing now and we’d be delighted to hear from other younger people with the condition. Although it’s less common, I’m sure there are people out there who haven’t come across us yet.

“It’s very helpful to share your experiences, especially if you’ve just been diagnosed. It’s a bit like having a baby — the first few weeks are incredibly stressful while you’re getting used to a new way of living and it helps to speak with other people who are facing the same challenge.”