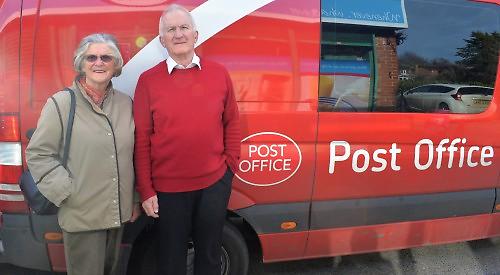 RESIDENTS of Wargrave say they are delighted to have postal services back.

The Post Office has added the village to its mobile service roster following the loss of the counter when the Victoria News shop in Victoria Road shut in August.

The closure meant residents had to travel to Henley, Twyford, Hurst or Reading for post office services.

Wargrave Parish Council asked the company to provide an alternative and it has responded by arranging for the mobile van to visit the village on Wednesdays and Fridays from 9am to 10am.

The van will be based at 111 Victoria Road, which was chosen because it is near the old post office site and will be easier for elderly residents to access.

Councillor Marion Pope said: “We are very pleased the Post Office has been able to accommodate Wargrave.

“It would be nicer to have it more often but we hope the village will make use of it and spread the word that it is here. I would love to see it used as much as possible as it is a great asset to the village. It is very important for the elderly residents from Elizabeth Court and Highfield Park. It is those people who I worry about and they are the ones who have struggled the most. I have had to go to Twyford and I have taken stuff for other people as well.”

She added: “I appreciate the Post Office has had to adapt its schedule to get us this far. It is trying to help.”

The service is being provided by the postmaster for Warborough as part of a route that also goes to Checkendon, Nettlebed, Stoke Row and Woodcote. The timings of visits to the other villages had to be altered in order to add Wargrave.

The mobile van features the majority of the services you would expect at a traditional post office.

The van first visited Wargrave during the first week of March and had 25 visitors, who said they were pleased not to have to travel outside the village anymore. Some felt two days a week was sufficient while
others wanted to have a more permanent solution.

Christine Goddard, 70, of Highfield Park, said: “It really makes a huge difference. We would be lost without it because otherwise we would have to drive to Twyford.

“I live on my own and I have been going to the post office in Reading but I have to go on the bus. I am very pleased this is here now. It would be nice to have a permanent one but this is marvellous — it is a godsend.”

Lydia Kosoric, who lives in Victoria Road, said: “I’m quite lucky to live so near to it. This is much more convenient than having to get in the car to Twyford. It might be more difficult for people who work every day during the week but for me this is perfectly adequate.”

Jeremy Mai, 48, of Langhams Way, said: “It is really helpful having it here because without it we have had to make a special trip into Twyford and I have had to do that all the time. It is also far better if you can walk. I probably won’t use it on a regular basis but I know it will be useful for other people.”

Robert Davis, 72, of Dark Lane, said: “I think it is a brilliant idea. I only found it by chance when coming to A & I Stores. I hadn’t heard about it before but this will save me from having to go to Twyford.”

Sharon Hewitt, 73, of Purfield Drive, said: “Twyford has a perfectly good post office but I don’t want to have to drive there. I can drive but I have pain in my hip so I would rather not. There are lots of people living at Elizabeth Court and this location is perfect for them.

“I was delighted when I heard it was coming to Wargrave. I would like a more permanent post office rather than just a mobile one.”

Subpostmaster Ric Tilbe, who runs the service on Fridays, is a retired teacher from Winnersh, which was added to the roster at the same time as Wargrave.

He said: “Wargrave and Winnersh have both been picked up. We have a number of other communities that have asked if we can help their village but at the moment the Post Office just can’t fit them in.

“The people I have spoken to say they are very grateful we are here and it has been the same in Winnersh. You can get almost everything except for passports and driving licences.”