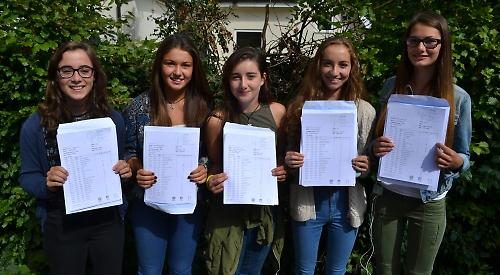 FOUR former Henley students are backing a national campaign to make teaching the history of the British Empire compulsory.

India Burgess, Sally Kupisz, Finsu Gurung and Harriet Parfitt have urged Gillotts School, which they attended between 2009 and 2014, to join them in supporting Fill in the Blanks.

Their call comes after about 300 people staged a protest in Henley in support of the Black Lives Matter movement on Tuesday last week.

Demonstrations have taken place in 16 countries following the death of George Floyd, a black American, at the hands of a white police officer. Protesters in Bristol tore down a statue of merchant Edward Colston, whose wealth built many of the city’s institutions but was founded on slave labour, and threw it in the River Avon.

It has also been confirmed by Public Health England that a disproportionate number of deaths from the coronavirus pandemic were among non-white people, which has been blamed on gaps in the quality of housing, work and other living conditions.

Fill in the Blanks was launched earlier this year by a group of sixth-formers from London whose families originate from former British colonies.

It calls for all pupils in years 7 to 11 to be taught a “balanced assessment” which acknowledges technological and economic progress under imperialism but also points out the violence, slavery and oppression carried out in its name.

It says the empire is rarely taught in some schools while others play down the less favourable aspects, which it argues has repercussions in the present. The Henley women say they learned about the slave trade at Gillotts but their classes, in which they watched historical dramas like Roots, emphasised America’s involvement without explaining the role Britain played.

Although slaves didn’t work in this country, Britain imported products like sugar, cotton and tobacco which were grown in the States and the Caribbean using their labour.

It then exported them to Africa, where slaves were captured and frequently killed in the perilous journey across the Atlantic.

The women also didn’t learn about race relations in Britain after the Second World War, when large-scale immigration from Commonwealth and former Empire territories began, and they say this is especially important because more Henley residents are white compared with the national average.

The quartet, who have all gone on to study history, law or international development at university, were taught about racism in America but say this allows pupils to assume it was never a problem here.

They say Britain’s colonial past means there is still prejudice against black, Asian and other ethnic minority citizens and this harms their educational and professional prospects.

Miss Burgess, who took part in the Henley protest with Miss Gurung, said: “We can’t understand modern Britain without acknowledging that our economic development depended on extracting labour and resources from enslaved black men and women from the 17th to 19th centuries and the colonies in Africa until the 20th century.

“Our growth depended on slavery and involved the oppression and murder of millions of individuals. Failing to teach students about British involvement in this enables students to feel emancipated from responsibility. They leave Gillotts without understanding how structural and institutionalised racism continues to benefit white people.

“Henley is not very diverse so it’s even more important that students understand why their opportunities to go to good universities, to get good jobs and live comfortable lives are the result of colonialism and slavery.   It’s essential that the next generation understands and takes responsibility for racial injustice, both historically and today.” The women, all aged 21 or 22, were in the same year at Gillotts and their families all still live in the area. Miss Burgess grew up in Sonning Common, Miss Parfitt in Shiplake and the other two in Henley.

They became aware of the gaps in their teaching after finishing school and would often discuss it when they met in the university holidays. They found out about Fill in the Blanks following recent events.

Miss Burgess, who read history at Manchester and is now finishing a master’s in international development at Cambridge, said: “The protests have definitely been a call to action.

“They echo views that I’ve held for some time, particularly since I studied the ongoing impact of colonialism on developing countries. I felt increasingly despondent that people weren’t being educated so I was very excited to discover a movement that wants to change that.”

Catharine Darnton, headteacher of Gillotts, said she supported the campaign in principle but hadn’t yet received the women’s correspondence so couldn’t comment further.

She said schools must teach to the National Curriculum, which is set by the Government.