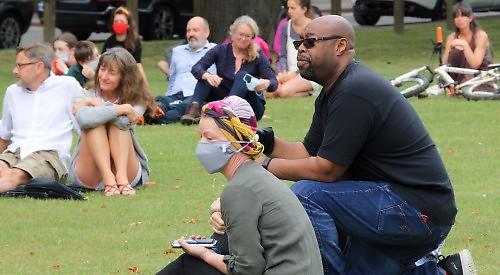 ABOUT 100 people took part in a Black Lives Matter protest in Goring.

Participants gathered at Gardiner recreation ground, off Upper Red Cross Road, shortly before noon on Sunday to kneel and observe a silence of eight minutes and
46 seconds.

This was the length of time that George Floyd, a black American, was pinned under the knee of a white police officer who was arresting him on May 25. He died of suffocation, sparking worldwide protest against all forms of racism.

About 300 people attended a peaceful protest in Henley last week and there were similar events in cities including London and Bristol, where a statue of industrialist and slave trade Edward Colston was thrown into the River Avon.

Protesters at the Goring event, which lasted about half an hour, remained 2m apart to preserve social distancing. Many wore masks to prevent the spread of coronavirus and a small number of them had brought signs.

They listened to a speech by Tony Virgo-Harris, who has lived in the village for more than 20 years and runs the Virgo Beauty salon in High Street with his wife Sarah.

Mr Virgo-Harris, 52, who is one of Goring’s few black residents, urged onlookers to learn about black history and reflect on their own unconscious prejudices. He said he mostly felt accepted but at times villagers had crossed the road to avoid him, chosen to stand on the train rather than take an empty seat next to him or shifted their bags in suspicion when he was near.

He told the Henley Standard that he was delighted at the amount of support at the protest.

Mr Virgo-Harris said: “I was humbled, pleased, surprised and scared — I must have gone through every emotion.

“I was worried about speaking out but I felt obliged to say something as I’m probably one of the few people in Goring who’s affected directly.

“Some people have been very nasty about this movement on social media. I didn’t think any of those people would show up on the day as it’s easy to be brave behind a keyboard, but I did worry about the effect it could have on my family and business. It’s not like people don’t know where we are.

“I think it’s important to consider what it’s like to live in someone else’s skin. We’re all capable of bias, including myself, and we need to fully understand history if these things are going to improve and move forward.

“It’s okay to disagree and I value freedom of speech but the debate needs to be constructive.

“I hope this movement encourages people to think about an issue they’ve felt able to ignore because it doesn’t affect them.

“It’s not enough to be quietly non-racist — we have to actively resist it and more and more people are doing that.”

The protest was organised by Tim Schulz, who lives in Elvendon Road with his husband James Dawe.

He wanted to combat prejudice because the couple, who run a cider brand, would sometimes receive homophobic comments when they ran the Catherine Wheel pub, off Station Road.

Mr Schulz, 40, was also annoyed that a smaller, informal protest which took place in the village last week had attracted racist abuse on social media.

He said: “I wanted to do it bigger and better and I was very pleased with how it went. Gardiner rec is a bit out of the way but it was important to go somewhere big enough for everyone to protest safely.

“A few passing cyclists stopped to look but on the whole it was quite low-key. It was a very powerful event — when you’re staying silent for almost nine minutes, it really brings home how long that is.

“Tony’s speech was moving, positive and touching and it got a lot of applause.

“Goring has a fairly conservative population, as we saw in the pub all the time, but there’s a strong sense of community and on the whole people won’t tolerate any kind of bigotry or abuse.

“We had about 1,500 guests at our third and final Goring Pride event and for everyone who said ‘we don’t want that kind of thing here’ there’d be 100 who said they did.”