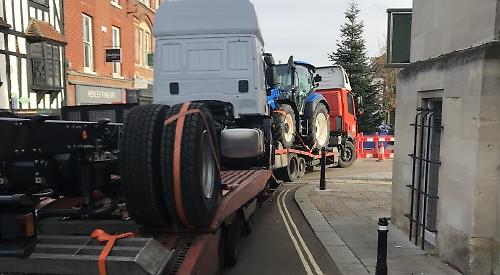 A PETITION to ban heavy goods vehicles from using Henley as a “rat run” now has almost 2,000 signatures.

Amanda Chumas, of Bell Street, is asking residents to back her campaign for a
7.5-tonne weight restriction on vehicles with no business in the town.

She says they pose a threat to pedestrians and are damaging the town’s streets and historic buildings because they mount the pavement and their wheels generate heavy vibration.

This week, a supporter took photographs of the latest incident in which a lorry became stuck while trying to navigate the town centre.

The driver of the Polish vehicle, a long flatbed carrying a tractor and a lorry cabin behind that, had driven south along King’s Road and was struggling to get around the narrow clockwise street surrounding the town hall. The driver eventually made it after being guided by members of the public but mounted the kerb, leaving tyre marks, before going back up King’s Road and crossing Henley Bridge via Bell Street, New Street and Thames Side.

This follows an incident in September in which two lorries transporting mobile homes got stuck trying to get around the town hall after approaching from Hart Street and Market Place.

Shortly before that, a crane lorry broke down at the junction of Bell Street and New Street for more than three hours from about 8am, causing huge traffic jams.

Campaigners spoke to several HGV drivers who got stuck in the resulting queues and they admitted using the town as a cut-through.

Mrs Chumas said she was pleased with the number of people who had signed the petition, which will be presented to Oxfordshire County Council, the highways authority, which would have to agree a traffic regulation order. She said: “It’s good to see we’re getting traction and I’m delighted that this is becoming a community effort.

“I may have started this but people clearly feel strongly about it or they wouldn’t have signed.

“I’m grateful to everyone who did, as well as the people who put up posters promoting it and giving out leaflets. We wouldn’t have got this far without them.

“There’s no particular target — it’s about letting the county council know how strongly people feel about this and making clear this isn’t just the concern of a few people.

“The more signatures we get, the more we can impress this upon them. Our campaign has already made its case but the council needs to hear it from the wider electorate.”

The ban, which would cost about £125,000 and could be enforced using automatic number plate recognition cameras, is supported by town councillor Stefan Gawrysiak.

He is also a member of the county council, to whom he will put a motion asking for the order.