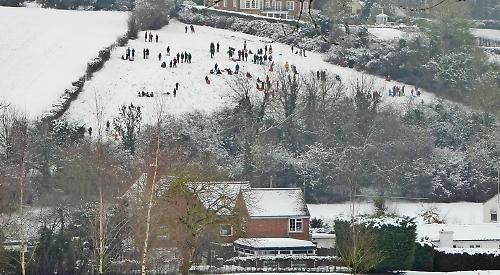 A FORMER Mayor of Henley has called the prospect of homes being built on a green field “intolerable”.

Barry Wood is opposing plans by Bloor Homes for 100 properties on the upper half of Lucy’s Farm on Drawback Hill, behind the existing houses in Blandy Road.

It comes nine years after he launched a group called United!, which successfully campaigned against plans by the same developer for 130 homes on the land.

Mr Wood, who was then a town councillor, has spoken out again following the launch of a new campaign by three Henley residents against the latest application.

Domenic Bertelli, Justine Hutchinson and Christine Wright are also opposing a proposal by Gillotts School for about 50 homes on a disused sports field immediately to the west of the site.

The secondary academy off Gillotts Lane says it needs to sell the 3.4-hectare plot for up to £20 million to fund refurbishment of its dilapidated Sixties buildings. Bloor says there is “marriage value” between the plots as they could share an entrance off Blandy Road.

Both sites are being considered for inclusion in a new version of the Henley and Harpsden neighbourhood plan, which Henley Town Council is producing to meet an increase in housing targets across South Oxfordshire.

Mr Wood, who used to live in Blandy Road with his wife Jeni, also a former Henley mayor, before the couple moved to Peppard in 2014, says his original concerns remain valid today. He said: “I applaud what the campaigners are doing and all power to their elbows because this really does need opposing.

“United! started the opposition to that site and, but for us, Drawback Hill would have been developed.

“We actually instigated the idea of 50 houses at the Gillotts’ field but the entire purpose was very much to keep housing off Lucy’s Farm, which serves as a ‘pair of lungs’ for the area and offers some amazing views.

“The thought that it could be built upon is intolerable and I know many people living in the Harpsden valley felt the same as they would be highly visible in that beautiful landscape.

“I’m convinced that people are just as concerned now as ever.

“You’ve already got 163 new houses at the old Highlands Farm, off Greys Road, with even more being proposed, so a further 150 houses off Blandy Road would change that area out of all proportion.

“However, I still think the community can afford 50 homes at Gillotts and should allow that so the school can expand. But a whole new housing estate? No way.”

The campaigners are against either site being built on, saying it would harm views of the countryside and erode the green space between the two parishes. They say it would also additional pressure on surrounding roads, schools and other public services.

The campaigners are to launch a petition to the town and district councils expressing the strength of feeling in the community.

Mr Bertelli said: “It’s marvellous that a man like Barry, who lived in the town for so many years, is supporting us.

“We’ve been delighted by the personal responses we’ve received from people in the town, both those we know and those we don’t. There can be absolutely no question that many others share our concerns.”

Colin Hiscock, whose family has owned Lucy’s Farm for at least 50 years, has criticised the campaigners’ claim that wildlife would be affected.

He says there are no rare species of birds or butterflies on the land and development wouldn’t remove any nesting areas as the site is open land with only trees and bushes at the perimeter.

Bloor says development could be kept back from the site boundaries, which would reduce the impact on views, and there could be additional planting to improve views and wildlife habitats.

The campaigners also say Drawback Hill is a popular area for sledging on but Mr Hiscock says this happens on an area further to the east, off the footpath between Rotherfield Road and Harpsden, so wouldn’t be affected by the development.

Henley Town Council recently completed a survey on housing need in the two parishes and will host public consultations before a new draft plan goes to referendum, hopefully in the autumn.

If more than half of voters approve the final version it will become a legally binding part of plannning decisions.

It has not yet decided which of the 13 sites submitted by landowners should be included, if any.

South Oxfordshire District Council’s new local plan says Henley must take 115 extra homes by 2035 on top of the 500 or so it has agreed to accept by 2027.

Some residents say the town has already met this through windfall developments but Mayor Ken Arlett says it can’t rule out going above the quota to secure more “affordable” and social housing for young people.