Please help save my girl 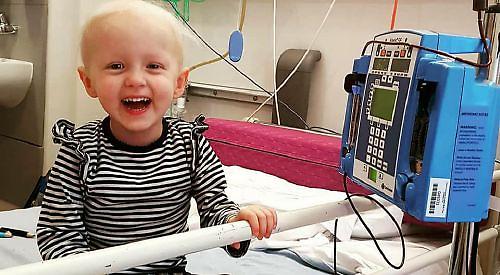 THE mother of a little girl with a rare and aggressive form of cancer is trying to raise £241,000 in a last-ditch bid to save her life.

She had eight rounds of chemotherapy treatment followed by a four-hour operation to remove a growth in her abdomen before being given the all-clear.

She was still receiving treatment to boost her immune system when doctors confirmed last week that the disease had returned — and worse than before.

Elara, who lives in Knappe Close, Henley, with her mother Nicky and bulldogs Roxy and Reggie, now has the disease in her brain, spine and possibly other parts of her body.

The team at the John Radcliffe Hospital in Oxford, which has cared for her from the outset, says it is probably incurable and they can realistically only prolong her life for a time.

But Ms Foxley, a former office administrator at Invesco in Henley, wants to take her daughter overseas for experimental drug treatment.

It is being trialled at a hospital in America and another in Spain. Ms Foxley said: “Being without my daughter isn’t an option. I simply cannot survive without her.”

Elara was born at the Royal Berkshire Hospital in Reading on June 9, 2017 and was seven weeks premature so, her mother says, she “battled right from the start”.

Her cancer fight started in December 2019 when a bruise below her right eye wouldn’t heal.

Her GP referred her to the John Radcliffe, where blood tests showed she had a very low platelet count.

Ms Foxley recalled: “When they said her blood was ‘abnormal’, I passed out because I could tell something was terribly wrong.”

The doctors grew alarmed when they felt a mass in her abdomen and soon afterwards confirmed it was neuroblastoma, which typically affects young children as it grows in leftover tissue from foetal development.

It had also spread to her bones, which often happens as the condition is rarely detected at an early stage.

She was able to go home sometimes but had to spend long periods at the hospital, including Christmas.

Ms Foxley said: “It was an awful shock at first. There’s nothing to prepare you for a consultant using phrases like ‘rare’, ‘aggressive’ and ‘incredibly hard to treat’ and you can only fear the worst.

“You have to quickly adjust to a ‘new normal’, plaster on your best smile and stay focused on the treatment plan, which gives you something to cling to when life suddenly becomes so uncertain.

“I told Elara there was a ‘cheeky monster’ in her tummy which had to be taken out and the chemotherapy would give her ‘super-powers’ to beat it. It was crushing for me but I had to stay positive for her sake.

“I turned it into an adventure where we were going to visit our ‘friends’ at the hospital and at times she really loved it, though she missed the dogs, who had to go and live with my sister.”

The pair spent Christmas on the children’s ward when several charities came with Father Christmas and once he touched down in a Chinook helicopter.

Children awoke on Christmas Day to find gifts in stockings at the foot of their beds and ate a traditional festive lunch.

Elara’s hair began falling out that day, which her mother had warned her would happen.

Ms Foxley said: “A big clump came out in her hand but I’d told her some naughty fairies were going to take her hair away and give it back better than ever.

“She was laughing and saying, ‘Mum, the fairies have come’ and I had to go outside and have a little cry.

“She lost weight, was sick and lost her hair but never complained and always lit up the room with her bright and infectious smile.

“It was hard to stay positive and there were some very dark moments but my friends and family were behind me and I can’t thank the nurses enough for their support. I had to believe we’d somehow get through it.”

The chemotherapy finished at the end of February 2020 and had shrunk Elara’s main tumour by 60 per cent as well as clearing the cancer from her bones. The remaining growth wasn’t wrapped around any organs so surgery was possible.

Professor Kokila Lakhoo, who carried out the operation in late March, said afterwards that all visible growth was gone.

Ms Foxley said: “The operation was the longest four-and-a-half hours of my life. It wiped out Elara completely and left her very thin and pale but she came around, smiled and ate some food.

“The coronavirus lockdown was in effect by then so we couldn’t have visitors and she was released as soon as possible to avoid the risk of catching it. We called her scar her ‘monster mark’ and she’s still very proud of it.”

The hardest challenge was yet to come as Elara needed high-dose chemotherapy in case any microscopic tumours remained.

She was given such strong drugs that her immune system was temporarily destroyed and even a cold could have killed her.

She returned to hospital in May and was supposed to leave after a month but developed veno-occlusive disease in which blood vessels to the liver become blocked.

She remained under observation until this healed and left in July.

Elara and her mother were kept in strict isolation so she didn’t pick up any bugs. She couldn’t celebrate her third birthday because the treatment stopped her digestion, which left her constantly fatigued and living off liquid meals.

Ms Foxley said: “The fear of coronavirus was horrendous — it was a very emotional time. Before treatment started, I only allowed friends and family to ‘visit’ us by waving and chatting at our front window.

“We were kept in one room the whole time and Elara couldn’t eat, talk or swallow for most of it and needed constant morphine for the pain.

“That was definitely the hardest time but the treatment seemed to be going well so we couldn’t have asked for more.

“I warned Elara she would feel rubbish at times but promised I’d be there to make her feel better. She was frustrated that she couldn’t talk but we cuddled and watched films on the iPad — I must have watched Toy Story 4 a hundred times.

“There was an agonising wait for her to recover and her health sometimes got worse after a few good days. I was constantly looking at the nurses’ faces to try to guess whether they had good or bad news.”

Elara got the all-clear a few days after going home.

“It was amazing but I couldn’t believe it at first,” said her mother. “It’s the news you’ve always wanted but you’re scared to get your hopes up.

“The doctor kept using cautious phrases like ‘no evidence of disease’ and I was asking, ‘so that’s good, then?’”

Elara underwent four weeks’ precautionary radiotherapy in September then returned to the hospital for immunotherapy, which uses drugs to teach the immune system to fight cancer.

The experimental therapy which Elara could undergo is a more advanced form of this.

She was due to undergo five rounds of this treatment, each lasting 10 days with a five-week wait in-between, but had just completed her third round when she became ill last week.

Elara was experiencing pain in her right hip which rapidly worsened until she couldn’t walk. Her mother feared the worst and called the hospital, which told her to go straight back. She underwent a lumbar puncture which showed cancer in her brain and spine and tests are still being carried out to assess the full extent of her relapse.

Ms Foxley said: “Most young children need an anaesthetic for an MRI scan but Elara was so well-behaved and just lay there holding my hand while I sobbed. They kept coming in saying they needed some dye but wouldn’t tell me what it was for.

“Dr Elbeshlawi kept saying he couldn’t confirm anything but there were abnormal areas. I understand why he couldn’t say more but I could tell it was back and they’ve now confirmed the outlook is very negative.”

Elara is now on steroids to reduce any swelling in her spine and will undergo some form of NHS treatment in the UK, then hopefully take part in the overseas trials soon afterwards.

The charity would organise Elara’s treatment abroad and the money raised would cover that as well as travel, expenses and additional procedures like scans.

Ms Foxley based her £241,000 target on other people’s experiences but doesn’t yet know whether it will be enough.

So far she raised more than £70,000 in donations after family and friends shared her story online.

The Harris + Hoole coffee shop in Duke Street, Henley, is to host a fundraising cake sale tomorrow and on Sunday.

Ms Foxley said: “I’d be shocked if we needed less than £241,000 and it could well be more but the charity will help us draw up a budget.”

“So many people have shared our story in such a short space of time and I’m grateful to every single person who has helped. To get more than £70,000 in donations in a few days is just amazing.”

She is yet to tell her daughter the latest news.

“She’s sad because she can’t walk properly but I don’t know what to tell her, or how to tell her, until we know exactly what’s happening.

“As far as she’s concerned, we’re just going back to see our old friends at the hospital and take some pictures because she’s so beautiful. We should know a bit more by the end of this week.

“We were so happy at Christmas and it really felt like we were on the home stretch after all that gruelling treatment.

“Elara’s immunotherapy was meant to finish on Easter Sunday and I’d arranged for a charity to lend us a bell she could ring.

“All my positivity has tanked because we’re not even back at square one now. It’s more like ‘square minus ten’ because we’re even worse off.

“Elara’s very good-natured but the steroids give her mood swings and sometimes she gets very upset, saying ‘Mummy, I don’t want to be angry’. I have to reassure her that it’s okay and I’ll always love her very much.

“I’m a mess and she knows something isn’t right but if her time is going to be limited, I want us to be happy for as much of it as possible.

“The support we’ve received through the appeal has been a huge relief as it gives me space to just sit and play with her.”

To support the family, visit https://www.gofundme.com/f/elaras-neuroblastoma-treatment