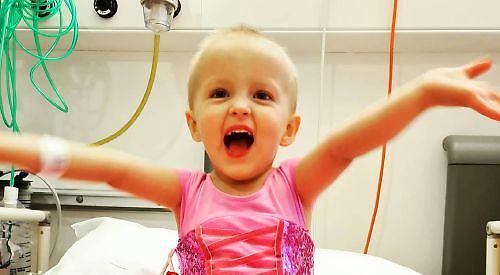 A LITTLE girl from Henley who was being treated for a rare and aggressive form of cancer has died.

Supporters had pledged more than £217,000 to save Elara Foxley, whose stage 4 neuroblastoma returned last month despite appearing to have been successfully treated.

The money would have paid for a private form of immunotherapy which is being pioneered overseas but then it turned out that the three-year-old was too ill for this to work.

Instead, doctors at the John Radcliffe Hospital in Oxford kept her comfortable until she passed away with her mother Nicky by her side on Sunday morning.

Ms Foxley, of Knappe Close, told the Save Super Elara group on Facebook: “My beautiful Elara passed away this morning. If my love could have saved her, she would have lived forever. I am heartbroken with grief.”

Elara was diagnosed in December 2019 and underwent two rounds of chemotherapy, radiotherapy and an operation to remove a growth from her abdomen.

She got the all-clear last summer but took a turn for the worse at the start of last month, when she began struggling to walk. Tests showed the disease was back in her brain and spine and this time nothing could be done.