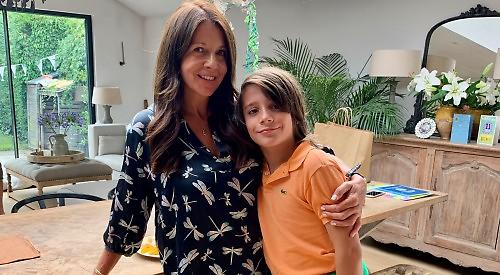 GINNY BUCKLEY is determined to protect the rural idyll she now calls home.

The television presenter and motoring journalist, who moved from central London to Lower Shiplake in 2009, is among the growing number of residents and business people who want Henley MP John Howell to back the Climate and Ecological Emergency Bill in Parliament.

It accounts for our entire carbon footprint in calculating emissions, includes measures to actively conserve ecosystems and calls for the establishment of citizens’ assemblies to give ordinary people a say.

Ms Buckley, 52, says backing it was a “no-brainer” as she fell in love with the area on her first visit and wants to save it for future generations. including her son Zak, 11.

The pair often walk the Thames Path and other popular routes with their cocker spaniel Ziggy and ride stand-up paddleboards along the river in the summer, collecting litter as they go.

She also hopes the Bill will reverse a chronic air pollution problem in Henley, where levels of harmful nitrogen dioxide and particulate matter from exhausts have been well above Air Quality England’s minimum safe limit for more than a decade.

A recent study by Imperial College London, which used computer modelling to gauge levels in surrounding villages, suggests the same is true for certain types of particulate in Shiplake. Other pollutants are below the limit but the study says there is no safe level and the village’s reading is “significant”.

This is why Ms Buckley drives an electric car and runs a website called Electrifying.com which reviews new models, promotes their uptake and advises newcomers on buying and maintaining them.

She says: “The Bill fills lots of gaps in the legislation and is the best way to tackle air pollution while preserving our natural world. We’re blessed to have this beautiful river, the Chilterns countryside and its wonderful wildlife, and should do everything to defend it.

“Across all sectors, customers are asking businesses more about where their purchases come from and the impact they might be having. Business owners need to unite and send a clear message to our MPs that we care about this too and want the Government’s support.” Ms Buckley, who has co-presented the BBC’s Escape to the Country since 2015, says she made her own “escape” 12 years ago as she was fed up with her busy life in Belsize Park and wanted to live somewhere quieter and cleaner.

She learned of Henley’s air pollution problem from friends living in the town centre but was shocked to hear about the Imperial study from fellow villager Kate Oldridge, a member of the environmental campaign group Greener Henley, which is gathering support on behalf of the Oxfordshire CEE Bill Alliance.

Ms Buckley was attracted by the Bill’s emphasis on preventing floods, which is a problem in the part of the village where she lives. In early 2014, some streets were underwater for weeks after the River Thames and Lash Brook, a backwater, burst their banks.

Her garden, and those of neighbours, often flood in winter and this will worsen as temperatures rise and the polar ice caps melt, increasing water levels globally. This will affect other flooding hot spots such as Mill and Marsh Meadows in Henley, the Hennerton backwater at Wargrave and the Gatehampton area of Goring.

“I moved here without even visiting Henley,” said Ms Buckley. “I was sold purely on the charm of this village, which I absolutely adore because of its proximity to the river and great walks on the doorstep.

“I first popped into Henley after moving and immediately realised how lucky I was to not only have more space and a better quality of life, but also this beautiful and historic market town just a few minutes away. I was shocked to learn how air pollution is even affecting Shiplake, which seems like madness, but it was a wake-up call because it highlights how serious the bigger picture is.

“We’re tucked away by the river and not on a major road but if we can’t get it right here, what hope is there anywhere else? Air pollution is now linked to 40,000 premature deaths in this country.

“The Bill also has a big focus on flooding and we all know how prone this area is — and let’s not forget biodiversity, either. I can’t be the only one who’s seeing fewer bees. All this matters to everyone and if we don’t act now, our children won’t be lucky enough to inherit the same world that we did.”

Ms Buckley grew up in Rochdale and when she was 18 moved to Australia, where she worked in radio and television until she was 23.

She came home to present the BBC’s The 8.15 From Manchester, a regional children’s programme, before hosting travel, entertainment and motoring slots for Granada Television. The last of these was a lifelong passion as her father Tony was an enthusiast who often took the family to car shows.

Ms Buckley was one of the first presenters on Granada Men and Motors, a satellite channel which launched in 1996, alongside
future Top Gear co-host Richard Hammond.

She says it was exciting despite shows being made on a “shoestring” and it was a “fantastic” training ground for her future endeavours.

She later fronted the BBC’s Watchdog and Holiday programmes and ITV’s current affairs show Tonight as well as presenting Sky News. She was appointed motoring editor of News of the World in the late Nineties, the first woman to occupy that role on a national title, and now holds the same post with Good Housekeeping magazine. Ms Buckley drove an early electric car about 20 years ago and realised their potential after reviewing a Nissan Leaf for the Sun a decade later.

She says the technology keeps improving and she founded her website in 2018 after researching for an episode of Tonight, which reported that the UK is ill-equipped to make the switch despite plans to ban the sale of petrol and diesel cars by 2030.

Ms Buckley now drives an electric Peugeot 208 which can manage about 200 miles between charges. She would like to see more charging points in Henley, a view shared by Greener Henley and the town council.

South Oxfordshire District Council, which has declared a climate and ecological emergency, could install more at its car parks in Greys Road and King’s Road, which currently have two each. Four more are planned for the town council’s car park at Mill Meadows.

Ms Buckley says: “I loved driving the Leaf — the whole experience made complete sense. We used to put lead in petrol but now look back in amazement and I’m sure we’ll feel the same one day about fossil fuels.

“It can seem complicated or intimidating for those who’ve been driving all their lives and that’s why I want to ‘clear the air’ in every sense with Electrifying. It’s helping to get those conversations into the mainstream.

“Henley is a fabulous destination but there isn’t the provision despite local authorities having a huge pot of money available. It could be brilliant for tourism, which would bring a huge benefit considering how devastated businesses have been after the coronavirus pandemic. There’s huge potential for this ‘green recovery’ which the Government keeps talking about.”

Mr Howell says he understands campaigners’ concerns but the Bill, which almost 100 MPs support, has “imperfections” that make it unviable. He says citizens’ assemblies, for example, have failed elsewhere.

He accepts climate change is the most important issue of the day but says the Government is addressing it through measures such as generating more electricity from renewable sources.

But Ms Buckley says: “This Bill is the first to draw a direct link between climate change and its impact on the natural world so I’d be curious to know more about those ‘imperfections’.

“Shouldn’t we just try everything we can? It’s not going to do any harm and this kind of negative messaging really frustrates me. No Bill will be perfect but that’s no reason to discard it.

“I’d welcome John to sit down for a coffee outside one of our wonderful cafés, then look at the air pollution levels and see how he feels. We’re only going to solve this if we get around the table and talk.”

Ms Buckley says her son and his friends are equally concerned.

She said: “Kids learn so much about the environment in schools and Zak has had me watching a lot of documentaries on Netflix, which prompts those important conversations between us.

“We picked up a lot of rubbish during the lockdown and when Zak went out on the river with a friend. They came back with paddleboards piled high with litter. I believe we can learn a lot from young people’s attitudes and it gives me great hope for the future.”

Ms Buckley didn’t realise the scale of the problem when she was younger but says more and more people are now aware.

She says “Looking back at my early career, if you’d told me that one day I’d run a company that focused on electric cars while one in 10 sold in Britain would be electric, I’d have laughed myself silly. But back then, we were ignorant about the environment. When I consider how many flights I must’ve taken for work over the years, it doesn’t always sit well.

“However, I ultimately care more about the planet that my son will inherit and the air he’ll breathe. In future, petrol and diesel vehicles will only be used occasionally or in museums and as part of classic car collections. Cars now account for 18 per cent of vehicle emissions so we’ve got to make that shift.

“Because of my work on Escape to the Country, people often ask where I’d choose to live if I could go anywhere but, quite honestly, I’ve found my favourite place right here.

“I grew up in the industrial north and I feel so fortunate every time I drive down Remenham Hill and over Henley Bridge. I look around and realise how much I want to pass it on to the next generation in the same beautiful condition.”