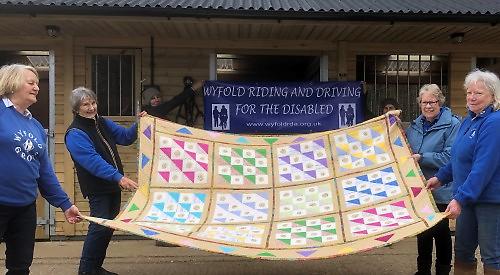 A VOLUNTEER has raised more than £2,000 for Wyfold Riding for the Disabled after raffling a homemade quilt.

Zara Campbell-Harris has been an instructor at the charity, which is based at Wyfold Court, for 45 years and wanted to help it recover from the loss of income caused by the coronavirus pandemic.

The charity, which provides horse riding facilities for disabled people from South Oxfordshire and Reading, has lost about £2,500 per month over the past year.

Mrs Campbell-Harris spent the third lockdown, which started in January, making the 140x200cm patchwork quilt. It has patterns made from pastel coloured triangles with stripes, floral designs and golden roses.

Mrs Campbell-Harris, who was given the charity’s President’s Award by Princess Anne last year, said she was delighted with the response.

She said: “I needed something to keep me occupied during lockdown and after attending a quilting course in Wallingford I decided to make quilts.

“After making them for all my family I decided to make one to raise money for Wyfold RDA as it has been so hard to fundraise over lockdown and we have had eight ponies to feed and take care of.

“As I used to be a professional dressmaker, I had lots of scraps of material that I could use so the quilt cost me nothing. It proved very popular and lots of people wanted to win it.”

Gill Rushworth, fundraising co-ordinator for the charity, said she was astounded by people’s generosity. She said: “In October I didn’t think I could carry on as I just didn’t know how to raise money. All our traditional fundraisers — the shows, fetes and marathons — had all stopped and I’m not a social media girl. I thought, ‘I can’t do this job any longer’. When Zara told me about her quilt raffle I thought the tickets would be hard to sell, especially as it’s difficult to contact people in lockdown but it worked well as people really liked the quilt.”

Another £6,000 was raised via an online fundraising page.

Mrs Rushworth said: “I was thrilled. We are going to come out of this pandemic and still be a viable charity.

“We got the ponies through the winter and we’re doing all right and the money is starting to come in.”

Wyfold RDA currently has eight ponies or horses of varying sizes and offers rides for children and adults.

It has access to facilities including an outdoor arena and parkland. The group is affiliated to the Riding for the Disabled Association.