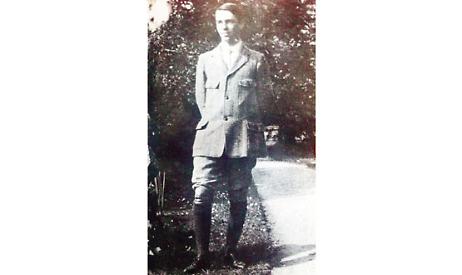 AN appeal to honour the life of First World War poet and soldier Wilfred Owen has reached the halfway mark.

The Dunsden Owen Association set a target of £25,000 to install a stained glass window at All Saints’ Church in Dunsden.

Owen lived in the village from September 1911 until February 1913 and was a lay assistant to the vicar at the church.

The association, which was formed in 2013, has partnered with the Glaziers’ Company to deliver the project, along with the parish of Shiplake with Dunsden and Harpsden.

The design of the window will be the subject of the Stevens Competition, which is run by the Worshipful Company of Glaziers and Painters of Glass.

Six prize-winners will be announced in 2022 and then local residents will have the chance to choose the final design. The committee hopes to have the rest of the funds in place by the end of the year, but the commission is unlikely to be made until later next year.

Chairman David Woodward said: “We’re halfway, which is fantastic news. We’ve had a number of generous donations and we’re still very much accepting new ones. We are enormously grateful for a single anonymous donation of £5,000, which has helped significantly.

“There is a plaque to him at the University of Reading where he was doing evening classes and there is a plaque on the village hall in Dunsden, but we want to make this the major commemoration of him. This is going to be the standout memorial to him.

“It is terrific that people have wanted to support us. We all care passionately about it, but it has been remarkably easy so far and we will carry on pushing it.”

Owen was just 25 when he died during the crossing of the Sambre-Oise Canal at Ors in France, a week before the signing of the Armistice in November 1918. He is widely regarded as one of Britain’s greatest 20th century war poets.

Mr Woodward added: “He only spent 18 months here, but it is amazing how many people remember a few lines of his poems from school. He’s had an enormous impact, because he was so passionately against the destruction of war and that’s the message that is still alive today.

“The competition for the design will be announed in the autum and the winners will be next spring.

“We’d like to get all the funding in place this year, so that we have the money sitting ready and waiting as the competition gets going.”

The association hopes to hold dedicated events to help raise the rest of the funds, including a drive-in quiz night at All Saints’ Church.

If you would like to donate, visit crowdfunder.
co.uk/stained-glass-window-for-wilfred-owen

You can send a cheque made payable to “Shiplake and Dunsden PCC” and referencing “Owen window” on the reverse to : ‘Owen Window’, Long Gardens, Sonning Eye, Reading RG4 6TR.