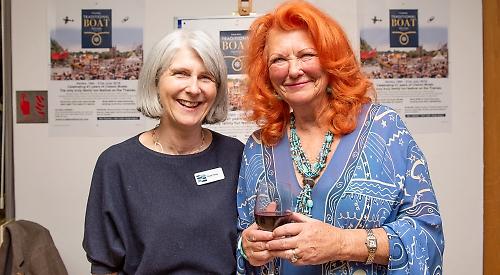 LADY McALPINE is urging consumers to buy British goods and produce and shun cheaper imports from the Far East.

She says this is far less damaging to the environment and will create more jobs in this country.

She has been doing this for many years and is now encouraging family, friends and contacts to follow suit by adding the slogan “Back Britain: buy British, don’t buy Chinese” to her email signature.

This has inspired her teenage grandchildren to take more interest in where their purchases come from and they have posted several videos about the subject on Instagram.

Lady McAlpine, of Fawley Hill, pictured right, came up with the idea shortly before Christmas, when one of the youngsters wanted some clothes from an online shop but didn’t know they were made in China because the website didn’t advertise this.

She investigated but refused to purchase the clothes because they would be flown or shipped thousands of miles to get here.

Lady McAlpine is also concerned by reports that workers making Chinese goods, which are typically far cheaper than domestic ones, are underpaid and exploited. Last year the country’s Communist government was found to be supplying major clothing and electronics firms with goods made by prisoners from the Uyghur minority group, which many human rights groups say are being persecuted.

Lady McAlpine says the British economy has been badly impacted by the coronavirus crisis so making more in this country would help to revive it.

But she says this will only happen if people stop buying foreign goods and foods, which would force retailers to look elsewhere. This would also make people buy less, using fewer of the planet’s natural resources.

She hopes her campaign will capture people’s imaginations in the same way as the 1968 “I’m Backing Britain” initiative in which people worked extra hours unpaid and pledged to buy British.

“I always bang on about buying British but this came about after we were hit by coronavirus,” she said. “We were hearing all these reports of the economy booming in China, where the virus originated, and it just seemed so unfair. So many of our purchases are made over there and people don’t realise because while it’s no secret, they don’t always make it clear.

“They have huge factories making things under the auspices of other companies, often in appalling working conditions which amount to slave labour.

“We’ve all become accustomed to paying too little for quality and are too focused on quantity. If you can’t afford to buy British, buy second-hand or ask yourself if you need it at all, which often you don’t.

“Most things used to be made in Britain and they lasted far longer — my first refrigerator and vacuum cleaner lasted 30 years and in those days we didn’t have a television set because they were too expensive.

“Additionally, British manufacturing is almost entirely reliant on small-scale stuff like the arts or specialist goods. There aren’t that many manufacturing jobs any more but I’m sure many youngsters who aren’t necessarily academic would love to be more involved in making stuff and learning a trade.

“This campaign touches on a lot of issues but it’s hard to make people pay attention these days so the slogan sums it up neatly and gives people something they can do. We’re often talking about the need for zero carbon emissions so let’s start by not importing stuff from halfway around the world and accepting that we can repair and reuse the things we already have.”

She said the same applied to food, explaining: “Now, more than ever, we need to be aware of the country of origin. Why do we call our country ‘Great’ Britain but don’t follow through with support? We are happy to support the tireless workers of the NHS and our publicans if they can do takeaway food.

“Can we not show the same support for our farmers, who can never take a day off, and for those struggling to keep businesses going and people employed?

“Supermarkets don’t help — three years ago I picked up a cauliflower in Tesco and put it back. The lady beside me asked what was wrong and I said, ‘Grown in Spain’. She hadn’t looked but put hers back too.

“At the time, Cornish cauliflowers were being ploughed back into the fields. I felt so angry — how can it be right for a cauliflower from Spain to be wrapped in clingfilm and offered to us instead of a fresh British one?”