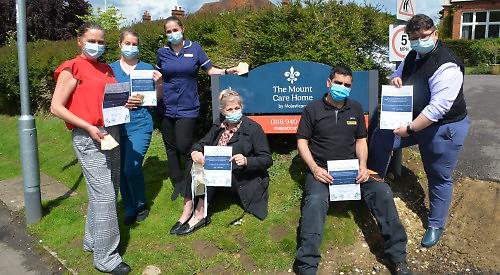 A CARE home wants to turn Wargrave blue to raise awareness of dementia.

The Mount in School Hill started handing out packets of forget-me-not seeds during the Alzheimer’s Society’s Dementia Awareness Week, which ended on Sunday.

The perennial wildflower, which is part of the charity’s logo, spreads easily, freely self-seeding.

The home, which has about 30 residents, specialises in dementia care and has previously held events in aid of the charity.

Julie Cotton, activities
co-ordinator, said: “This is a cause that’s very close to our hearts. A lot of our residents are affected by memory loss and we want to help the charity by planting hundreds of flowers.

“It has been very difficult for our residents in this last year, particularly for those who are most vulnerable. If you have dementia, it can be particularly challenging.”

Staff put up posters across the village in preparation for the awareness week. The home started with 96 packets of seeds and received early interest from the Piggott junior and infant schools as well as 1st Wargrave brownies.

Ms Cotton said: “We have been involved in the campaign before but we have never tried to turn Wargrave blue. We had lots of interest. Depending on how successful it is, we are more than happy to expand it.”

The home recently raised £186 for Guide Dogs for the Blind with a bake sale.

Manager Alex Toasca said: “We saw how much community engagement we got from that event. Seeing as that was such a big success, we thought that people were ready for something bigger. It is a great thing to be involved with and we want to get as many people taking part as possible. I think there is still a bit of a stigma about dementia and Alzheimer’s disease.”

If you would like a packet of seeds, visit majesticare.co.uk/
dementia-week