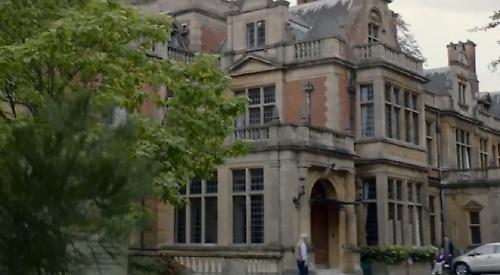 A NURSE who worked at the Sue Ryder hospice in Nettlebed is backing fresh calls to revive an inpatient service for the Henley area.

Anne Sandars, who joined the team at Joyce Grove in 1995 and retired in 2007, believes many patients in South Oxfordshire would still prefer to have a bed and a care team close at hand in their final days.

She was speaking a week after campaigners called on the charity to donate a share of the proceeds from selling the premises, which shut in March last year, towards a new bedded facility.

It’s understood that Sue Ryder is about to put Joyce Grove on the market for
£20 million after South Oxfordshire District Council awarded planning permission to convert it into 20 flats. The charity has wanted to sell for at least a decade, saying the Grade II listed property is too costly to maintain as it wasn’t built for the purpose and the location is too remote for some.

It had promised new beds elsewhere but went back on this when it announced the closure last January, saying there was no longer demand because most people now want to die at home.

It has moved its outpatient palliative care “hub”, which launched in 2018 and offers telephone advice and home visits, to Crowmarsh, where day services will also relaunch once covid restrictions end.

They say it should either build a new hospice with between six and 10 beds in the grounds of Joyce Grove, donate a plot for someone else to build one or donate £5 million towards build one elsewhere. The last of these should cost about £12 million with the rest of the money coming from grants and fundraising.

Mrs Sandars, 73, who lives in St Mark’s Road, Henley, with her husband Edward, says many people claim to want to die at home but find a hospice invaluable once the end nears.

She says Joyce Grove once had 20 beds but this was reduced to 12, apparently due to falling demand, although she believes it was to save money. The number was halved to six in 2019 on the same grounds.

Some patients have no-one at home to look after them so could become isolated while the families of others struggle to cope if they have other pressures.

Mrs Sandars said: “We used to have two wards, each with 10 beds, and the teams for both were always busy.

“I appreciate that Joyce Grove is difficult to maintain but we always said we wouuld  welcome a purpose-built hospice in the grounds.

“I’ve known friends who could never have managed their illnesses at home. Some houses have very small staircases or inadequate bathrooms and there’s a huge benefit to having someone else look after you or give medication immediately. If a new hospice were provided, it would attract a lot of community support through fundraising and I’m sure some wealthy individuals in our area who would get behind it.

“Joyce Grove was always a wonderful place to work. The ethos was that if you were going to die, it should be in the most beautiful and peaceful surroundings available and that needs to come back, albeit in a more modern setting.”

In a letter to this week’s Henley Standard, she says: “Sue Ryder tried to justify its decision to close the hospice on the half-truth that ‘most people prefer to die at home’.

“It is very different for people who are ill and worrying about how they and their family are going to cope with care in what may be a long period of uncertainty before end of life.

“Inpatient care provides vital relief to family carers, our unsung and unpaid heroes. Let us hope Sue Ryder will value the immense goodwill it still has locally and not throw it all aside.”

The nearest alternatives are Sobell House in Oxford, Thames Hospice at Bray or Sue Ryder’s Duchess of Kent hospice in Reading, though the last has only limited provision for patients outside Berkshire.

The Oxfordshire NHS Clinical Commissioning Group, which is responsible for securing hospice provision across the county, is considering installing two beds at Wallingford community hospital.

Cllr Gawrysiak said: “The need for hospice care in South Oxfordshire has been massively under-reported and under-investigated.

“The suggestion that we only need two beds is ridiculous —  if it was the case, why on earth would Sue Ryder and other charities have bedded facilities across the country?

“They should be asking everyone who uses the ‘hub’ whether they would have used an inpatient hospice had it been an option. I believe there’s a greater need and six to 10 beds is about right.”

The charity says it has offered to meet the campaigners several times and is willing to discuss solutions with the CCG, which could include staffing the beds at Wallingford, but it isn’t responsible for providing any service.