Widower wins campaign to have defibrillators at National Trust properties 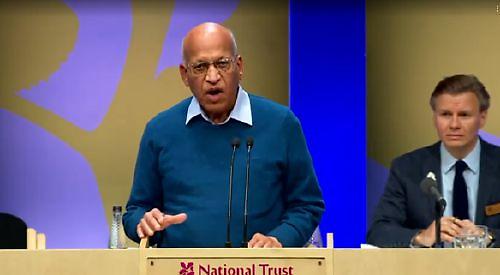 A VOLUNTEER at Greys Court has won his campaign to have defibrillators provided at all National Trust properties with more than 40,000 visitors a year.

Padmakar Agrawal, from Caversham, addressed the trust’s annual meeting where members voted in favour of his motion by a majority of almost 4,000.

It was only the second time in six years that a motion has been passed against the recommendation of the trustees.

Mr Agrawal, who lost his wife to a cardiac arrest in 2014, was delighted.

“It was a lot of hard work,” he said. “A lot of fellow members helped me in contacting their friends and their relations — it was a combined effort.

“I’m surprised that nearly 60,000 people voted for it despite the trustees’ recommendation not to.”

His wife Margaret died in hospital but he says the use of a defibrillator when she fell ill at home gave her a fighting chance of getting there.

He and his wife had been frequent visitors to Greys Court which, along with Nuffield Place and other trust properties nationwide, does not currently have a defibrillator.

Addressing the meeting in Harrogate, Mr Agrawal said: “Over 30,000 people suffer cardiac arrests outside hospitals every year in the UK and the survival rate is only 10 per cent. If the number of defibrillators was increased, this figure could be increased to 75 per cent or even more.

“In 2020 there were 14 suspected cardiac arrests at National Trust properties. A cardiac arrest could happen to anybody anywhere at any time without doing any exercises. Our members, a lot of them are elderly so they’re at a higher risk.

“A defibrillator costs around £500, which could easily be covered by one extra cup of tea sale at the property per week. It’s a very small price to pay to save lives. A defibrillator needs to be used within three minutes of a cardiac arrest. Therefore, we need defibrillators on site.”

Speaking against the motion, trustee Caroline Kay said: “I sympathise with and share the resolution’s aim to keep our visitors safe.

“The National Trust manages different types of properties and there are differing activities happening at these places.

“The very prescriptive wording of this resolution says we should take the action based on the numbers of visitors to a site rather than based on the risks of that site.

“A blanket requirement just based on visitor numbers might result in under-provision of other high-priority interventions at that or other properties.”

Mr Agrawal is staying on in North Yorkshire with his brother-in-law following Saturday’s meeting.

He said: “I’m making a holiday out of it — it’s a lot more enjoyable now because the motion has won.”

The meeting also discussed a motion proposed by Caroline McAslan, from Kidmore End, a former volunteer at Greys Court and Nuffield Place.

This called on the trust to formally consult with volunteers before making changes that affect their work. It was defeated by 59,015 against compared with 56,267 in favour.

Mrs McAslan is part of the “Restore Trust” group which was formed last year after a report by the National Trust listed 93 properties with links to slavery and colonialism, including Chartwell, Winston Churchill’s home.

The group claims the trust’s senior leadership is no longer up to the task of protecting, preserving and promoting Britain’s heritage.

Mrs McAslan, who stopped volunteering for the trust in December, said afterwards that she didn’t want to mention “wokery” issues but wished to focus on the way volunteers were treated.

She said: “I was a loyal and enthusiastic volunteer for over seven years until December. I held 14 different roles during that time and in my spare time I raised a substantial amount of money for the trust.

“Over the past few years, I and other volunteers have not felt listened to.

“Volunteers provide the backbone of the National Trust. Before the pandemic there were 65,000 volunteers. It is important to them that they feel supported, listened to and treated with respect.

“Today we have 50,000 volunteers, 25 per cent less. Why have so many volunteers like me given up their role? I can cite examples from many, many volunteers of an apparent disregard for their commitment to the trust.”

Trustee Ade Rawcliffe responded: “In a recent survey, 93 per cent of our volunteers said that they felt they were treated with respect.

“If you have 50,000 volunteers there will always be a small amount of people who are dissatisfied and I’m very sorry for your experiences.”

Mrs McAslan told the Henley Standard that she was “disillusioned” with the direction the trust had been heading in.

She said: “They’ve been turning away from the great houses and towards issues like the environment, which is obviously important, but my focus has always been on conservation. The conservation of houses is being downgraded.”

Mrs McAslan said she was concerned that volunteers at Greys Court were not listened to during the pandemic.

She said: “There didn’t seem to be any engagement to keep them onside. I think volunteers everywhere are not being listened to and there’s a silent majority who think there’s no point in saying it, so I wanted to say something.

“For example, a few years ago, Nuffield Place changed its opening hours without consultation with volunteers. Changing hours has a direct bearing on people who are working there.

“There’s a sense that the trust has been reinventing history and when volunteers ask about this they’ve not been able to say what they wanted to, they’ve had to stick to the party line.

“I love the National Trust — I’m fiercely loyal and dedicated and I find it hard to say anything against it. I want us to look to the future and get these issues resolved.

“Although we lost the motion, the trustee who spoke against did see me afterwards and we had a good chat and the director general spoke to me and she listened.”