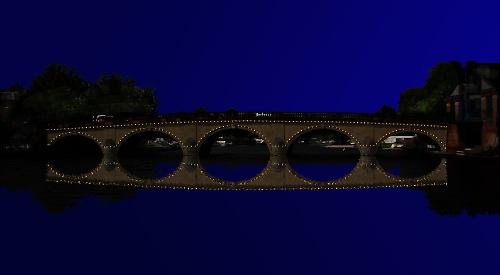 Businesses and town councillors have welcomed the proposal to have 470 energy-efficient, low-voltage LED nodes attached to the Grade I listed crossing.

The warm white lights would be fixed to both sides of the bridge and follow the line of the balustrade and each of the five arches.

As the Henley Standard reported last week, the plans have been drawn up by the Make Henley Shine group, which comprises six business people and is chaired by Daniel Bausor, from Bix, who has previously worked on bridge lighting schemes in London.

He says illuminating the bridge would revitalise the town and help attract visitors.

Henley Mayor Sarah Miller said: “I am very supportive of the bridge lights as long as they are in keeping with the area so it doesn’t look like Blackpool — not that I have anything against Blackpool — and that they don’t harm the stonework.

“There seems to be a good group of people working together on this to help make it happen and as long as they are transparent and keep everyone informed I will be very supportive of it. The bridge is so beautiful and I am sure lighting it will offer many benefits to Henley.

“You are always going to have some people against lights of any sort but more than 2,500 people did sign a petition in support of them.

“Henley as a whole is stunningly beautiful and people come for that reason but lighting the bridge will be an added attraction.”

Niki Schäfer, who chairs the Henley Business Partnership, said the new plan would overcome the previous criticisms of artist and entrepreneur Clive Hemsley who unlawfully lit up the bridge in February 2018 and is now part of Make Henley Shine.

She said: “I think lights on the bridge is a beautiful idea.

“Clearly this new plan has been very well thought through and Daniel Bausor has done a great job in going into such a high level of detail and getting in expertise.

“He understands the lighting of bridges and if he can appease the people who weren’t in favour of them previously then it is great.

“Henley and the bridge are picturesque and people always come here to take pictures. The lights will only be visible in the winter months when we should be looking to attract more visitors. We are very good at doing that in the summer.

“What it will do is benefit the evening economy and the restaurants around it, such as The Relais Henley, Villa Marina and maybe Shaun Dickens. The lights would really add to our status as a town.”

Henley MP John Howell said he had always been in favour of lighting the bridge and hoped the changes made to Mr Hemsley’s scheme would be approved by Wokingham Borough Council and South Oxfordshire District Council, the planning authorities.

He said: “I think it is a lovely idea that makes the town even more attractive. It is just a shame that our councils didn’t like the previous idea so all power to their elbow. What they have done in making them more environmentally friendly is very good and addresses the concern of too many lights and I really congratulate them on doing that.

“London bridges have lights and a number along the Thames do as well. Henley is a big and popular enough place to warrant such an attractive feature.”

Town and district councillor Kellie Hinton said: “I think there is a great will in the town for bridge lights but it needs to be done properly.

“Personally, I’m more of a fan of uplighting but if this plan is sympathetic to the bridge and the river and not garish then I support it.

“Daniel Bausor has experience of lighting up London’s bridges so I have faith in the scheme as he is bringing his experience to it.”

Grace Leo, co-owner of The Relais Henley, formerly the Red Lion, said: “I support the lighting of Henley Bridge for the simple reason that, from an unbiased perspective, I want to raise the bar for Henley.

“Ponte Vecchio in Florence is illuminated all year round and is one of the most photographed landmarks in the city and indeed in Italy.

“If we keep the Henley stone bridge a secret for our residents only, it will not help to attract the level of international interest that this town is in dire need of to uplift the business climate and provide the energy year-round so that the local economy can thrive other than during the few summer months of regatta and festivals.

“Whatever our community could do to help this cause will be appreciated by the organisers of this worthwhile project that might have a long lasting and positive impact on the town.”

Jonathan Hobbs, managing director of Hobbs of Henley, said: “I do like the idea. The first attempt by Clive set the ball rolling and showed what could be achieved.

“The bridges in London look magnificent and it would be great to have that for Henley.

“From a business point of view, the bridge would become something people want to come and see and perhaps we could run evening trips.

“For us, the river is such an important part of the town and the lights, if done properly, could be really great.

“I also support the safety aspect of having the bridge illuminated. The river is very busy at times with all the events here and having lights would aid navigation.”

John Whiting, chairman of the Henley Archaeological and Historical Group, said: “We are not opposed to lights on the bridge, it was just the modus operandi of the way Clive went about it. He didn’t go through the proper channels and just steamrollered ahead.

“It seems to be a new bunch of applicants and we will wait and see as to what their objectives are. On the basis of what was reported, it is not Blackpool illuminations and they seem to be more moderated.

“One issue remains, which is the way of fixing the lights to the stonework but if the likes of Historic England and others are in favour of it, we would likely be happy with it as well. We are not taking a stand or objecting to it until we know more.”

Oxfordshire County Council, which is responsible for the bridge, said it supported the plans provided the issues of safety, maintenance and insurance were managed satisfactorily by the applicants.