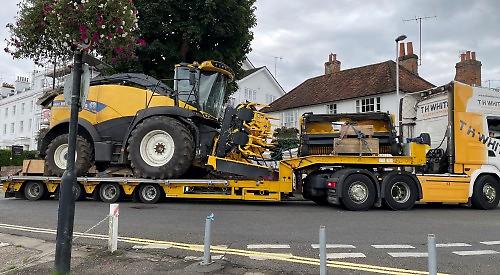 A NETWORK of routes for heavy goods vehicles is to be established in Oxfordshire.

This is designed to prevent large lorries being driven through market towns and villages, damaging properties and roads, creating air pollution and putting pedestrians at risk.

Oxfordshire County Council says it will work with the haulage industry to ensure routes such as the M40 and A34 are properly promoted.

Members passed a motion put forward by Conservative Councillor Kevin Bulmer, who represents Goring, proposing a regional network of well-serviced HGV through-routes plus measures to assist or encourage communities to report infringements and for the police to take action against persistent offenders.

The council will also encourage haulage companies to include the routes in their GPS systems and delivery firms to switch to electric or hybrid vehicles.

Cllr Bulmer said that a countywide approach was needed so that restrictions introduced in one town or village did not shift the problem to others. He said: “This isn’t an anti-HGV motion and I’m hoping a holistic approach will avoid the beggar my neighbour potential in any ad hoc individual restrictions.

“We need to make sure that if we’re not going to have HGVs going in one place they don’t end up in a place that’s even worse and currently that’s a danger.

“Vehicles have got bigger and so have their impact — our roads weren’t built for modern HGVs, they were built for horse and cart.

“I’m keen that this motion will help reduce air pollution in our villages and market towns, where the street layouts concentrate the pollution. We also have damage caused to historic buildings due to HGVs trying to use unsuitable routes.

“The logistics industry is keen to take part and come up with solutions. It would be nice if police take action against any persistent offenders in areas where restrictions are applied.” The motion was seconded by Councillor Stefan Gawrysiak, who represents Henley and has supported the campaign for a 7.5-tonne weight limit on Henley Bridge, effectively banning larger HGVs.

The council has agreed to consider an order to implement the ban and officers are now looking at installing number plate recognition cameras to enforce it.

Cllr Gawrysiak said: “For far too long communities have been decimated by heavy lorries that have an impact on people’s lives.

“We’ve got to recognise in all of this that we are talking about people and the quality of life for our residents.

“Vehicles should be subservient to people, cycling and walking in our villages and our towns.”

Speaking after the meeting, he said: “If you go down Bell Street every day there are lots of huge lorries mounting the pavements, which is dangerous for pedestrians and children.

“If we can engage with the HGV industry to have a route that avoids Henley, that would be all to the good.

“It does not mean we are giving up on having a traffic regulation order to limit the size of HGVs.

“We’ve always said that 90 per cent of HGVs coming into Henley just go straight through. Many are going from Slough to Didcot so they should not be coming through Henley. The cameras will enable us to prove this.”

The motion stated that the coronavirus pandemic had led to an increase in goods traffic, making roads less safe for pedestrians and cyclists and contributing to air pollution and causing noise and vibrations.

It continued: “There will be adverse consequences for many of our highways if this increase does not abate.

“Moreover, it is a regrettable fact that even where weight restrictions are implemented, they are too often ignored.”

Amanda Chumas, who led the campaign for the weight restriction on Henley Bridge and lives in Bell Street, said she was concerned the motion could prove to be a fatal blow.

She said: “The problem is that if recommended routes are merely advisory, they will not stop HGVs using Henley as a traffic corridor and in particular to link the M4 and A34 in order to save journey time.

“Only if we get a weight limit will HGVs be legally prohibited from using Henley as a river crossing and traffic corridor.

“Only at that point will their route mapping software stop sending them through Henley.

“We’re calling for clarity as to where things now stand with regards to the county council’s highways department’s willingness to proceed with a weight limit for Henley.”

For more information about the campaign, email henleyhgvwatch@gmail.com