I think ‘will I talk to mum tomorrow?’ 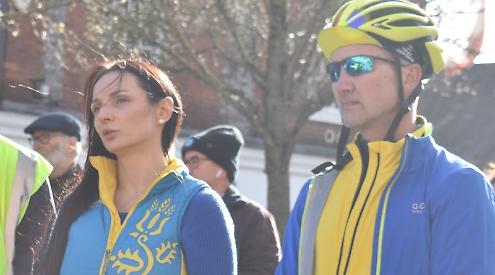 A WOMAN has told of how her elderly mother has been sleeping on the floor of her flat in Kyiv as the Russian bombings continue for the third week.

Last week Natalie Johnson, from Lower Assendon, told the Henley Standard how 84-year-old Iryna Bozhko, who lives on her own on the 10th floor of a 28-storey block, had to sleep on the toilet floor to protect herself from any explosions.

Now she has moved to the entrance of the flat where she feels it is safer to spend the night. Mrs Johnson calls her almost hourly to check on her welfare.

She said: “She has been sleeping less and less because of the bombings that now are coming even closer to her flat. She moved from the toilet and now sleeps on the floor by the entrance, which is more protected.

“A few nights ago she said goodbye to me because she was so scared and thought we would not speak again.

“She had packed a bag and she told me she was ready to run but when I rang her in the morning, she was safe. It’s constant bombing and I heard it over the phone when I talked to her, it was really scary — she sometimes puts the radio on to try to cover it.

“She counts the lights in the nearby buildings to check there are still people there. She managed to buy milk and bread and she still has food. Now we are keeping our fingers crossed and just praying for this to be over soon. Everyday I go to bed thinking, ‘Will I talk to her in the morning?’”

Mrs Johnson, who runs an online shop for women’s cuff-links and an award-
winning bed and breakfast, left Ukraine when she was 19 and got married but still considers it her home.

She said: “I’m feeling very stressed. What is happening there is just inconceivable and there has not been much progress but I still believe that these next few weeks will be crucial and that the Ukrainian people will win.”

Meanwhile, a woman from Nettlebed has been joined by her mother and sister after they escaped from Kyiv.

Anastasiia Lypynska is originally from the city and her relatives escaped on the third day of the Russain invasion.

They stayed in Warsaw while they applied for UK visas. These were granted on Sunday.

Ms Lypynska said: “I feel better now because my mum and sister are here with me but neighbours sent photos on Monday showing that mum’s flat windows have been smashed by a blast.

“My mum feels terrible that they are here while her sister and her family are still there. It’s very tense now because we know that the Russians are not succeeding in occupying Kyiv and are becoming more desperate. Everyone is worried about how they will try to do it.

“My cousin lives near the outskirts of Kyiv and says it is very loud and the sky is red.”