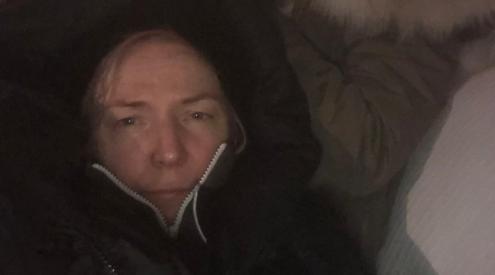 A UKRAINIAN woman living in Nettlebed has been joined by her mother and sister after they escaped Kyiv.

Maria Moniatovsk, 28, and Nadia Moniatovsk, 57, spent a week hiding in basements in their home city following the Russian invasion.

They say they will never get over their experience.

Mother and daughter have now joined Maria’s sister Anastasiia Lypynska, 37, who helped
co-ordinate their escape, at her home in Nettlebed and are assisting her with her efforts to help other people still in Ukraine.

The women were all born and raised in Kyiv. Ms Lypynska met her British husband Michael Lilburn when he was working in the city eight years ago and they moved to Nettlebed last year.

Maria moved back to Kyiv in February 2021 from Austria, where she had been studying and working.

Mrs Moniatovsk’s husband Vladimir died in March last year and Maria moved in with her mother to support her.

She started work as an operations manager at a development company.

Maria said: “I had a wish to stay in Ukraine with my family. I felt I had good prospects as it was an amazing job and I had everything for it — I had my place at my mother’s house and I had great people around me.” She said that while they were aware of Russian troops massing at the Ukrainian border, she did not believe there would be an invasion.

Maria said: “Friends of mine were asking me what will happen, will we have an invasion? I told them, ‘No, come on, we’re in the 21st century, we’re in central Europe, it’s not possible’.

“Some people were leaving Ukraine and someone told me at the beginning of February that my family should leave the country but I was thinking people were panicking.

“People were just in their houses, going about life as normal and it didn’t feel like something would happen.”

Ms Lypynska said: “We knew the Russians were at the border but we’ve got used to that over the years.

“It’s very difficult as a human being for your brain and psychology — you have a routine, you have to go to work tomorrow at 7am and you’re mentally involved in that.

“After Crimea people did start to leave the country. They said you can expect nothing good here in the near future and that it was not worth investing unreturnable resources like your life, time, money and effort to build your dreams and ambitions here because it would not last, they would be taken away. And that is now what’s happened.”

On the morning of February 24, Maria was sleeping when her mother came into her room to wake her and said the sirens were sounding in the centre of Kyiv.

“I said, ‘Mum, come on, it’s okay’ but she said something had exploded. She didn’t know exactly what had happened but she said, ‘We have to pack our bags’.

“I said, ‘Okay, if you’ll feel more calm then we’ll do it’. I was still not believing this but on the second day I started to hear explosions and to think that I had to do something to protect myself and my mum.

“We started looking for shelter underground and realised our apartment building had a basement.”

The women lived in the basement with very little light for three days alongside other families. If they wanted water or to eat or use the toilet they had to risk going upstairs to the flat from where they could see flying missiles.

Ms Lypynska said: “In the first three days when they were bombing civilian buildings, I was saying to Maria, ‘They just missed a strategical target, don’t worry, it’s just a one-off mistake’.”

Maria said: “You always want to think, no, no they just missed or no, no, it will not happen in the 21st century but it’s happening and you’re sitting there and you’re hearing explosions nearby and you feel like the walls are shaking.”

She and her mother spent two days in the basement before moving to an underground car park at a flat owned by Ms Lypynska, which she rents out.

The car park had more exits and was less risky than the basement which could have meant being trapped underground.

Ms Lypynska said: “You learn from experience. Going into the basement made sense but then you realise that could be a mass grave... there’s no escape.”

Maria said: “We thought okay, we’ve found a place we can hide but there is no place 100 per cent where you will be safe.

“You just have to go and use what you have near you. You have to try to stay in one place and not run.”

The women spent two days in the car park while they made a plan to escape Ukraine by car, helped by the people renting Ms Lypynska’s flat.

Ms Lypynska said: “Day and night we were researching safe routes, talking to people who had already crossed the border.”

Maria said: “We were planning to go by car and we were feeling more sure of this option because you’re in your own transport and you can manage it.

“She said it was dangerous as the Russians had started to relocate themselves in villages, not on the main road, so you don’t see them and because the main road is bombed you have to go through villages.

“She said to go was to die and we would have to wait.

“A woman had two tickets for a train and we decided it was better to go by train.

“I was crying because I realised there was no option where it was 100 per cent certain that I would survive. You just want to leave, take your body, put it in the transport and go, just go, run.”

On the sixth day of the invasion the women travelled to Kyiv’s main railway station to take a train to Lviv, a city just 70km from the Polish border.

Maria said: “We were very lucky because while there was already a lot of people, there was not as many as we saw two days later when there were people one on top of another.

“The train from Kyiv to Lviv was almost the sweetest part.

“When we reached Lviv there was a train that was going to the border and we took our place in the line. It was long and underground in the subway.

“We were waiting for two hours but when the train arrived at 1pm we couldn’t board, there was no room.

“The woman we were with was saying we should go somewhere to stay and come back in the morning. I was saying no, we could not leave this line, we had to wait another four hours, stay there.

“We were packed in, adults, old people and kids, and waiting six hours to get the train and when we get the train it’s cold and people don’t have seats.”

The women finally arrived in Warsaw where they were met by Ms Lypynska’s husband. They were eligible to apply for UK visas as members of Ms Lypynska’s famioly and submitted their documents on March 4. They then waited 10 days for the application to be approved and twice had to find new places to stay as hotels in Poland were filling up.

They arrived in Britain on Monday last week.

Maria said: “It was very fast to proceed with the documents but very long to wait.

“When we arrived in Poland we were allocated a hotel and waiting for an online form on the website of the embassy. On March 4 we provided our documents.

“The situation is always changing and the embassy are getting more and more experienced. I hope the process will get faster.”

The women say they cannot yet think about a future in Britain while Ukraine is under attack.

Maria said: “I don’t think I will ever get over this experience. It’s not normal.

“It’s very difficult to describe what I feel. I used to work with a psychiatrist for two years for my personal needs and she has been texting me asking how I feel but I can only reply with one or two words.

“Even now that I’m safe, my mode of consciousness is still that I’m eating, sleeping and drinking enough water, but I cannot think about how I will live here and find a job here because my friends are still there, some of my relatives are still there. Yes, thank God, bombs are not going over my head but I’m still there in thought. My psychiatrist said, ‘Just tell me what you feel’ but I don’t have time to tell what I feel, I don’t have a wish to speak because I understand that to put it in one hour, it won’t be enough.

“It’s strange — I arrived in the UK and I have always wanted to come here because I have my family here, some friends of my childhood are here.

“But I didn’t expect it to be in these conditions. When we were escaping we weren’t thinking where are we going to go? We didn’t even have that question in our mind.

“I do really see and feel the support from people in Poland and the UK — simple people, not people who have power. Simple people are doing even more than they usually do when they help people. It’s something I’ll never forget, I will tell this story to my kids.

“There’s a lot of people I didn’t know, people who helped us in the visa centre, people who hosted us when we couldn’t prolong our hotel in Poland. Simple people that just do, they don’t sit and wait and think all this mess will pass.”

Mrs Moniatovsk said: “I feel very peaceful here but I feel 50/50 because I left my house, I left two of my sisters, my nephews — my niece has a little boy only three years old.

“I’m very stressed about what is going on there with them. Sometimes I can’t keep my tears back, it is very sad. But I’m very thankful to all the people who are here for the many good things they’re doing for us and saying to us.

“It gives us hope that everything will be good, that this world is, in the most part, good.

“It’s painful to see happy kids here when you know what’s happening to the kids at home.”

Ms Lypynska says the refugees arriving in the UK will be useful in helping those left in Ukraine.

She said: “We all have accounts in Ukraine. This is a very powerful tool. Humanitarian help from charities is good but my network, my friends and family will not get that support and they have to survive in circumstances with no food available, no medicine available.

“But many of the refugees that have accounts have to start their lives over and there’s a limit to the personal income they can send. I’m draining my personal income and I will not stop but I need support from elsewhere.

“It’s important if someone who wants to help Ukraine can reach out to Ukrainian citizens based in the UK and donate to this person. Then they can support a network of real people in distress and despair by small, instant transfers.

“It’s possible to request receipts and ask them to show you how the money has been used.”