Families keep their cool at annual fund-raiser for churches 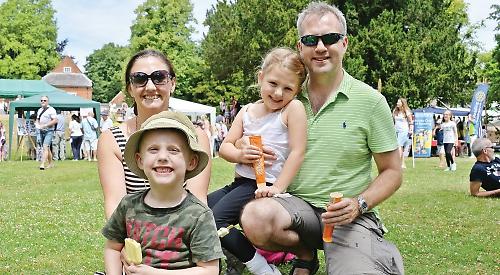 The event, organised by the parish churches of St Peter and St John in Caversham and St Margaret’s in Mapledurham, took place at the riverside beauty spot off Church Road last Saturday afternoon.

There were dozens of stalls offering traditional fairground games like hoopla, hook-a-duck and a prize tombola as well as selling books, plants, bric-a-brac, cakes, arts and crafts and homemade preserves. Other attractions included a Pimm’s tent by the river, a hot food stand and afternoon teas and ice creams. Local clubs and groups also had stalls explaining their role in the community and encouraging people to join.

St Peter’s church, which overlooks the site, was open throughout the day for people to sit and reflect or enjoy the shade.

Meanwhile, the Tadley Band played brass arrangements of popular songs including a medley from the musical Oliver! and students from the Joanna Wright School of Dance showed off their skills.

There was also a grand draw with prizes including a £150 John Lewis voucher, a pool party, meal vouchers for a number of local restaurants and a cruise on the Thames.

The proceeds, which are yet to be counted, will go towards the churches’ charitable activities.

Churchwarden Steve Jenkins, who sits on the organising committee, said: “There was a really good crowd of people and the weather was brilliant, which also helped. There had been talk of rain but it held off.

“It was a very successful day and we know from feedback that lots of people enjoyed it, not just on the lawn but in the church itself. It was so hot outside that it was a great example of ‘church is cool’ — quite literally!

“We haven’t yet counted the proceeds but it looks as though they’re as good as last year, if not better.”