No one is more surprised than me that I'm an MP 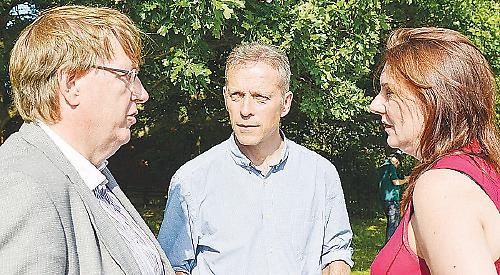 NO one was more surprised when Matt Rodda became MP for Reading East at the general election in June than the man himself.

The Labour candidate was elected with a majority of more than 3,000 as part of a national swing towards his party, kicking out the Conservative incumbent Rob Wilson after 12 years.

“I was genuinely staggered to have won, particularly by that margin,” he says. “I’d expected to lose by about 500 votes and would have seen that as an achievement as it felt like a safe seat.”

It was the second time he had stood in the seat, which includes Caversham and Emmer Green. The first time was in 2015 when he came second with 16,697 votes against Mr Wilson’s 23,217.

Five years before, he had stood in the “unwinnable” Conservative stronghold of East Surrey.

Mr Rodda, who has lived in Caversham with his wife Sarah and their two children since 1999, had been a Reading borough councillor for the town’s Katesgrove ward since 2011 when he decided to have another go.

He says: “When the Prime Minister called a snap election, I felt it was a good idea to stand as I was a recognised name and hoped to increase support for our party.

“I thought we’d do better than in previous years but never expected to win and was very surprised on election night. There were signs on the day that we might win but I didn’t truly think it was possible.

“YouGov produced a more detailed prediction which forecast a Labour win in both Reading seats but I was sceptical as their analysis is historically weighted in our favour.

“The count was declared at 5am so it was the middle of the night and I was utterly shattered. I’d been working flat out for weeks and was running on sheer adrenaline. There was a lot of emotion and everyone around me was incredibly tired as well so it was quite an experience to win.

“People were saying ‘you’re going to win’ but I refused to believe it until I saw it. I guess it’s like when you’re watching football and know your team’s pushing ahead but you don’t want to jinx it in the final minutes.”

Mr Rodda grew up in Wallingford and attended Wallingford School before studying history at the University of Sussex. He then trained as a journalist for the Wokingham Times before moving on to the Coventry Evening Telegraph, where he became education correspondent.

He left journalism in 1998 to become a ghost writer for David Blunkett, who was then education secretary in the Labour government. On the morning of October 5 the following year he was on his way to work in London by train when he was involved in the Ladbroke Grove rail crash in which 31 people died and hundreds were injured.

Mr Rodda would almost certainly have died himself if he had been in his usual first class seat, which was towards the front of the London-bound train, but he was standing further back in the buffet car due to overcrowding. The front cars were consumed by a massive fireball.

“It was a very traumatic event and made me look at my entire life from a different perspective,” says Mr Rodda. “I survived through pure chance and could just as easily not be here now.

“It was a normal commute to work and I was in the buffet car when there was this massive crash and derailment. If I’d followed my normal routine I would have been killed.

“Over the months that followed I slowly began to see how chance plays a big part in life and, in my case, I felt quite grateful but also sobered by the experience. I walked away totally uninjured and that made me reflect on how some people aren’t as lucky in many different respects.

“It makes you think quite deeply when you then see a government that’s actively trying to improve things and address the bad fortune some people have had, like being born into a disadvantaged community and not having the same opportunities extended to them as others.

“I saw the chance to make a difference through a well-organised and funded plan and also realised the improvements being made under Labour couldn’t be taken for granted. These were things like better secondary school results, more children being able to go to university or take up apprenticeships and better treatment on the NHS as well as faster waiting times, which are now going up again.”

Mr Rodda continued working in the Department for Education until 2008 and then had various education management roles before moving into politics.

He said: “I didn’t think I’d end up taking that route when I was younger but I came to believe that Labour was doing very important work in the public sector and could see some really significant improvements, which inspired me. Many of my colleagues felt the same — we had a lot of enthusiasm for public services and I wanted to do my part to protect them.”

This year Mr Rodda has campaigned against the Government’s cuts in public sector spending, which the Conservatives say is necessary to reduce Britain’s economic deficit.

He says: “People are sick and tired of austerity. Many residents in my constituency work in the public sector and feel they’ve been treated dreadfully by this Government.

“I think Labour is a government in waiting as the Conservatives are reliant on the DUP after the result of this year’s election. We want to pressure them on key issues and hopefully get a compromise. We need to let local councils build more housing and a much bigger proportion of private development needs to be affordable. That could have a significant positive impact on the prospect of young people being able to afford their own properties.

“Reading has a huge amount of brownfield land so we shouldn’t need to expand into the South Oxfordshire countryside. There’s enough to meet our needs until 2036 but it’s a question of building the right mix. At the moment developers are sitting on sites while waiting for their value to increase or building too many luxury flats.

“I would also like to see the cap on public sector pay lifted because many workers’ salaries have gone up below inflation, which is effectively a pay cut. Some say you can’t afford it but we’re talking about key professionals like teachers, police officers, doctors and nurses, so I don’t think we can afford not to.

“The world economy is growing and we need to be offering our
children the best possible education, so it’s common sense as well as
compassionate.

“The Government is also in a mess trying to negotiate with the EU. It has been far too aggressive and won’t be able to reach a resolution so the sensible answer is to take the heat off and have a transitional period of two to four years with continued membership of the single market.”

Mr Rodda made his maiden speech in Parliament on July 21, in which he praised campaigners who fought Oxfordshire County Council’s proposal to close Chiltern Edge School in Sonning Common following an “inadequate” Ofsted report.

The closure has now been shelved and the education authority has given the school until October to show “green shoots” of improvement.

Mr Rodda says: “I felt absolutely humbled the first time I walked into the chambers of the House. When you look at the green benches and think about all the famous people who’ve spoken there, you feel the weight of responsibility on your shoulders and it’s quite daunting.

“However, I’m a practical person so I’ve been sorting out tasks like getting my own office. I’ve got a small one in the Palace of Westminster rather than a larger one over the road at Portcullis House, which is convenient.

“It was wonderful how peopleon all sides responded to my maiden speech — they treated me really well. You get a lot of support as a new MP because everyone respects the integrity of Parliament.”

He says he enjoys a “great” relationship with Henley Conservative MP John Howell.

“He’s a really nice guy and I’m very keen to work with him,” he says. “I want to find common ground because I think it’s really important to be non-political where possible.”

Mr Rodda says: “It’s a much-loved local school and while it had a difficult Ofsted report, it was obviously going to get better and that’s exactly what happened. There’s clearly a real need for school places in that area, both in the Reading suburbs and the South Oxfordshire villages.

“I was pleased to support the campaigners and I’m very glad the council decided not to consult on closure. Now I’m pushing for a very clear statement that they will not revive this. Its latest GCSE results were very positive even against the background of threatened closure, which must have been incredibly stressful.”

He says he is still “in listening mode” on a future home for the Heights Primary School, a free school opened in 2014 to address a shortage of places in Caversham. It is currently based at temporary premises off Gosbrook Road but plans have been drawn up for a new school on a 1.2-acre plot on Mapledurham playing fields, off Woodcote Road.

The Education Funding Agency is offering £1.36 million towards improving the remainder of the 27-acre site and Reading Borough Council, which is a joint trustee, has agreed in principle to the sale. However, opponents say the land was left in trust to the public for solely recreational purposes.

Mr Rodda says: “I can understand the perspective of both sides because I’m both a local parent and a runner who regularly uses the playing fields. It’s a really difficult situation because there’s a clear need for more school places in the area but we obviously want to preserve green space.

“We have to find something that satisfies both sides and I’m still taking all arguments on board at the moment, though I agree with Reading Borough Council’s general stance.”

Like his predecessor, Mr Rodda supports Reading Borough Council’s proposals for a third bridge over the Thames in Caversham.

He says: “We face massive pressure on this side of the Thames from people driving into work and some degree of traffic is inevitable — it’s a question of managing it.

“Given the age of the existing bridges, it’s ridiculous to expect them to cope. The question is, do we address it in a planned, sensible way or do we wait until the last minute and do it in a rush?

“Reading Borough Council’s plan seems sensible as it would be a large bridge with a bus lane and would encourage use of public transport and cycling.

“It has got to be better than waiting in Sonning and being part of a large traffic jam. It would be much better socially and environmentally and could improve congestion in Henley and surrounding villages, which would also help with the town’s emerging air pollution problems.

“Wokingham and Maidenhead are both in favour because it would ease congestion on their residents. It makes sense when you consider the people in Sonning who’ve got fumes coming into their homes, which must be absolutely horrible.

“Reading faces pressure from a growing population and at times there’s been a lack of understanding from Oxfordshire. I hope we can have a more neighbourly relationship in the future.”